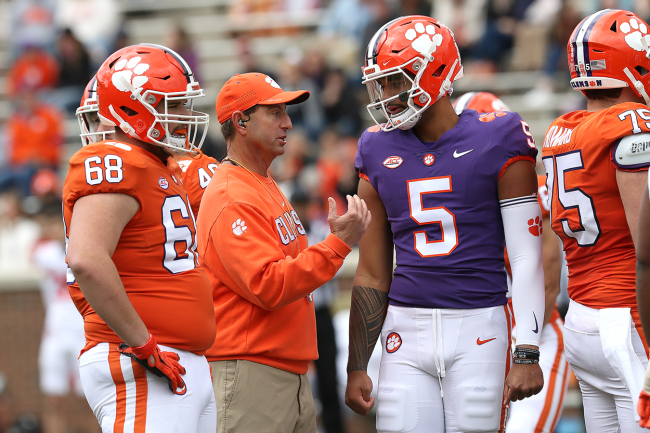 Dabo Swinney does a lot of things that are very easy to point at and laugh. Take his stance on Name, Image and Likeness and his recent attempt to hit ‘The Griddy,’ for example.

However, there is no denying his track record of success over the last decade at Clemson and his most recent comments on his quarterback make him so much more likable. In fact, Swinney’s unfiltered remarks almost make him seem like someone for whom you might enjoy drinking a beer with at a bar. Almost.

Last year was a down year for the Tigers. But Clemson still won 10 games and beat Iowa State in the Cheez-It Bowl.

At the forefront of Swinney’s team’s struggles was quarterback D.J. Uiagalelei. The former five-star quarterback, who played really well in his limited time as a freshman, threw more interceptions than touchdowns in 2021. It was less-than-ideal and significantly dissapointing.

As Clemson looks ahead to 2022, Uiagalelei is back at full health and lost a lot of weight. He says that he is in the best shape of his life and by all accounts, he is spinning the ball much better than he did last year. During spring practice and summer workouts, at least.

During ACC Media Days on Wednesday, Swinney spoke about his rising junior quarterback and all of the people that have written him off. His resounding defense of Uiagalelei was completely unfiltered and it was the most relatable thing that he has ever said.

Swinney joked that people are talking about Uiagalelei as if he is a “slapdick” from “Eastaboga Community College.” It was awesome, take a look:

"This guy can play the game at the highest level." @ClemsonFB HC Dabo Swinney is #ALLIN on @DJUiagalelei heading into 2022. @Chris_Spatola | @AllHands81 | @TomLuginbill | #ACCKickoff pic.twitter.com/ZeBTfFWTLa

Swinney has always been pretty buttoned-up and rarely cusses or uses any sort of profanity in public. While “slapdick” may not be a horribly explicit word — and a great one, at that — it was the most unfiltered we have ever seen the Clemson head coach and it makes him much more likable.