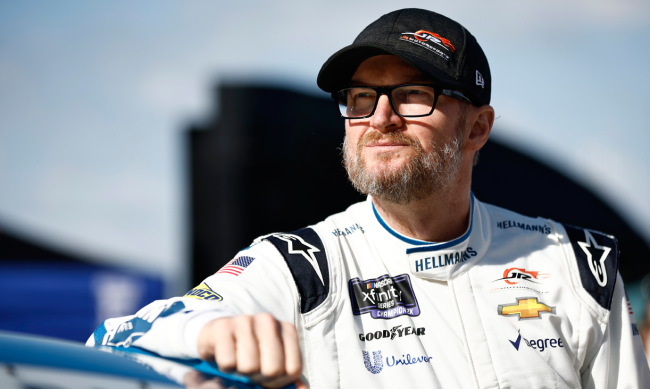 According to one report, Dale Earnhardt Jr. is worth around $300 million.

So, despite the fact that he forgets to bring his wallet with him all the time, it’s a pretty safe bet that he doesn’t have to fly commercial very often when he travels.

Recently, however, the 2022 NASCAR Hall of Fame inductee found himself on a commercial flight and from his description of how it went it doesn’t sound like he’s going to be doing it again anytime soon.

“Man flying commercial this week was some wild s–t,” Earnhardt tweeted on Sunday. “It was like they were challenging me to solve a complex riddle with a bit of choose your own adventure thrown in. Good times.”

I did get an unplanned stop in Amsterdam. Flew in and out of both NYC major hubs in one day. Missed 3 connections. A 6 hr delay. One cancellation. pic.twitter.com/jU9HtxxpJE

Then again, maybe he will fly commercial again, because it sounds like he does it more often than we might think. (Plus, he hasn’t exactly had the greatest experiences taking private jets either as he and his family were on a plane that crashed in 2019.)

It’s usually gone smoother. I expect some issues. This week was beyond crazy. 😂😂

Race fans were quick to respond to Junior’s experience with stories of their own and compliments on how well he appeared to handle such a bad experience.

I wish I had this mentality when I fly 😅

“I felt like they were watching me, thinking I was gonna give up at any particular moment. Truman Show,” Earnhardt replied.

They delayed our return flight to JFK and we missed our connection. So they put me on another connection. Conveniently at LaGuardia. No sweat!! 😅

Yes!! Sight seeing NYC is now added to the adventure. 👍🏼

He also, despite all the trouble, complimented the flight crews on the flights he took.

y’all make the whole experience a ton less frustrating. Everyone we met on our flights this weekend were super.

Junior also offered up some words of encouragement for anyone who ever finds themselves in a similar situation.

Damn. I can relate. Stay strong and don’t give up.

He might be worth $300 million, but Dale Earnhardt Jr. still seems like a pretty good dude. Not many guys with that net worth admit to once getting super drunk and running into his future wife with a go kart, after all.