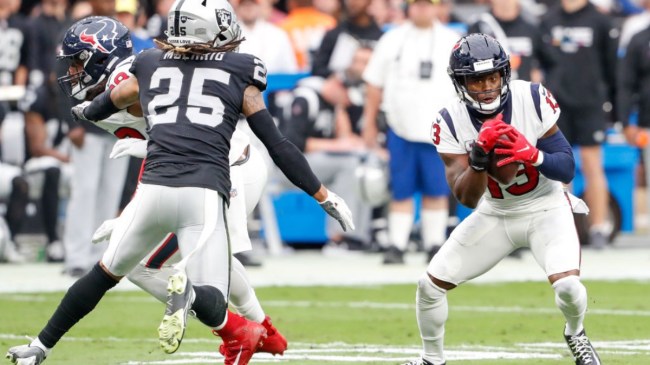 As the NFL trade deadline approached, there were a few names that were believed to be absolutely certain to be traded. Those players included Brandin Cooks and Kareem Hunt, who didn’t actually end up getting the chance to play for anybody new.

Cooks in particular seemed to be a player who was garnering quite a bit of interest from around the league with the Giants, Packers, Cowboys, and Rams all named as potential landing spots for the incredibly consistent receiver.

While Cooks didn’t end up finding a new home, it seems that one of those teams was trying to make something happen on deadline day.

According to a report from ESPN’s Ed Werder, the Cowboys were discussing a trade for Cooks right up to the last few minutes before the deadline, but they couldn’t come to terms with the Texans on compensation or on how to handle Cooks’ $18 million guaranteed salary for next season.

Two sources directly involved tell me #Cowboys and #Texans discussed a potential trade involving WR Brandin Cooks until the final minutes before the NFL trade deadline expired. Draft pick compensation and the $18M guaranteed salary for Cooks in 2023 could not be resolved in time

Cooks would have been a great addition for the Cowboys, but his contract definitely could have created an issue for them. This is a Cowboys team that has already had to make sacrifices to keep themselves under the cap, including trading Amari Cooper and releasing La’el Collins.

The offense looked fine this weekend even without added help at receiver and Dalton Schultz stepped up as a pass catcher in Dak Prescott’s 2nd game back from injury, so the Cowboys may not have felt like receiver was a desperate need for them right now.

Whatever the reason was for them not making a deal, the Cowboys will now attempt to make a run with the roster they had already put together.