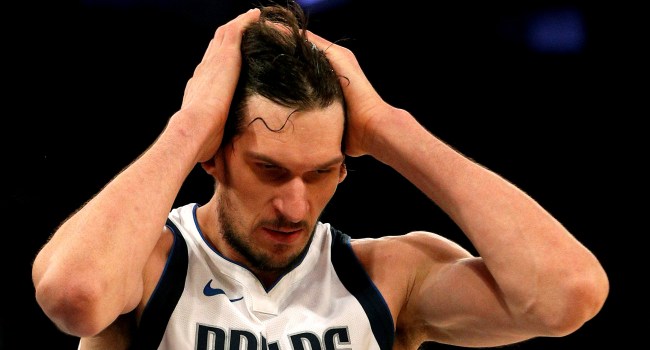 There have been some bad uniforms and jerseys in the world of professional sports in the past: MLB’s ridiculous Players’ Weekend uniforms, those terrible sleeved NBA jerseys, Michigan State’s retina-damaging neon uniforms, the 2019 NBA All-Star game kits, the Lakers’ 2018 ‘Statement’ uniforms, the Clippers’ 2019 ‘City’ Edition uniforms, the list is pretty endless.

Speaking of horrible ‘City’ Edition uniforms, the Dallas Mavericks just unveiled theirs for the 2019 NBA season and well, they’re not good.

Art-inspired… was the art used for this design found in a pre-school somewhere because that gear looks like something a toddler would design if they were given just a blue, black and lime green crayon. Also, is Dallas as a ‘City’ really best known for its art culture? When did this happen?

Oh, and if you happen to tune in to the November 26 Mavs vs. Clippers game you will be in for a real treat because that’s when these bad boys will make their on-court debut. Thankfully for our eyes, the Clippers will have already worn their terrible ‘City’ Edition unis on November 22nd. (Though they will be wearing them again on Christmas Day. Happy holidays!)

The Mavs will also be hosting over 20 local Dallas artists at the American Airlines Center on the 26th, “showcasing their custom works inspired by our 2019-2020 ‘City’ Edition Jersey.” The event is free and open to the public so there should be plenty of people on hand for the big official ‘City’ Edition reveal.

Based on Twitter reactions to the jersey though, the event might not go as well as the Mavs are hoping it will.

@mcuban I love the Mavericks, but please take a look at the comments, the vast majority of fans hate them already. I didn’t think you guys could top the embarrassment of those ‘03 silver alt jerseys, but you did. How many signatures on a petition are needed to cancel this jersey?

Terrible. Wow, there are no words to describe how embarrassingly terrible those jerseys are.

I like Fresh Prince of Bel-Air too, but you should send these jerseys to live with their uncle and aunt.

How is it that Reddit can spit up 5 better concepts in a week than Mark Cuban and you guys can spit in 20 years. I love you guys but god damnit why do you make this so hard.

Whoever @mcuban hired for this design: pic.twitter.com/J9C7kcG1Wl

And somehow the gradient makes it worse. Where are the clown shoes? Did KP draw the line at clown shoes?

is there a part of dallas that is known for it's graffiti?? wth does this have to do with the City of Dallas other than green piping from BofA building? AND AT LEAST MATCH THE NUMBERS TO THE FONT

Thanks Dallas, the Pistons leaked jersey yesterday was only the worst jersey on the internet for less than 24 hours