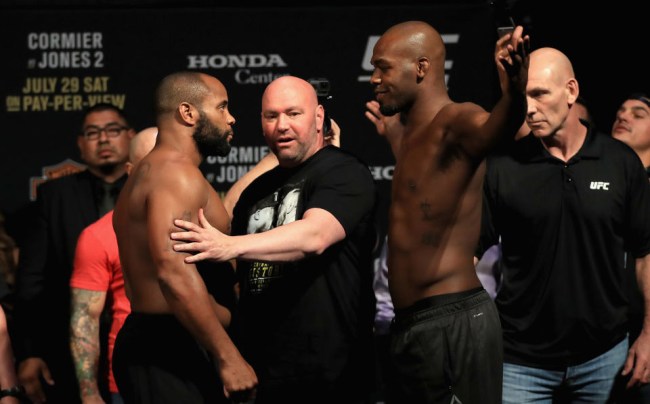 For the second time in as many tries, UFC superstar Jon Jones failed a drug test for a fight involving Daniel Cormier. The first time it happened, Jones was suspended prior to his scheduled fight against Cormier at UFC 200 costing Cormier a huge payday.

This time, as we reported Tuesday night, Jones, who is the only man to have ever beaten Cormier, failed his drug test after fighting and knocking out Cormier at UFC 214.

Many people have weighed in on the news, many of them very, very wrongly, but one of the most important people involved in this brewing controversy is, of course, Daniel Cormier, who lost his UFC light heavyweight championship to Jones.

Cormier has since issued a response to the news of Jones’ failed drug test to MMAFighting.com…

“We as athletes are entitled to due process, and I will refrain from saying much more until I know exactly what happened.

“In my mind, on July 29, I competed and I lost. I thought Jon Jones was the better man that day. I don’t know what to think anymore. I can’t believe we are going through all of this again. We will see what happens next.

“Thank you to all my fans who have supported me during this dark time. I love you all very much.”

Jones had said after the fight that, after some very vicious trash talk between the two, that he wanted to be friends with Cormier now…

Cormier, for his part, wasn’t interested in that, saying, “Friendship would be very difficult for us to achieve because of our history…And I’m okay with that. I’ve always said that we don’t have to be friends.”

I’m guessing now that’s of even less interest to Cormier.

UFC heavyweight Mark Hunt, who has been very vocal regarding the use of steroids in MMA and is suing the UFC over his loss to the currently suspended Brock Lesnar, was no less vocal when addressing the Jon Jones news calling him, according to TMZ, a “cheating ass loser” and saying Cormier should get all of Jones’ earnings for the fight.

Daniel says the only reason I defeated him the first time is because I must have been on steroids, wonder what his excuse will be this time pic.twitter.com/HMCFQBoBR4

For what it’s worth, here was UFC President Dana White’s take on the matter fresh after the news hit. It’s a little more subdued than the last time Jones failed a drug test.