Daniel Jones Speaks Out About Partying With Eli Manning, The Man Who Has A ‘Beer Guy’ At Every Stadium In The NFL 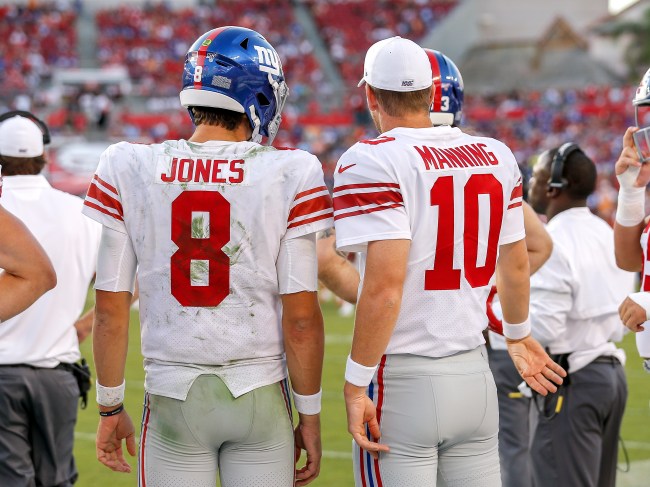 In the matter of one week, Eli Manning has executed the biggest rebrand since Ray Lewis became a God-guy in an effort to make everyone forget he was involved in a double homicide.

For the entirety of Eli’s 15-year NFL career, his public perception could be aptly compared to unbuttered popcorn. Eli always seemed like the dude who would only enjoy a cold O’Doul’s before new episodes of The Big Bang Theory, a show he really didn’t understand but couldn’t figure out how to change the channel.

I would like to apologize to Eli for my disparaging views on his entire existence, because this week it came to light that Eli fucks.

In a recent ESPN profile of Eli Manning, former New York Giants kicker Lawrence Tynes revealed that Eli Manning had a Beer Guy™ at every single stadium in the NFL. A person who was tasked with bringing Eli a 6-pack or 12-pack of cold boys after every game, regardless of the outcome, so Manning could crush bubbly muscles on the team bus with his fellow veterans.

The revelation came after footage surfaced recently of Eli Manning and Daniel Jones playing flip cup at a dive bar in New Jersey after the Giants’ fourth win of the season. Manning also made thousands of napkins rain in the bar (a weird move), but I respect the high ‘fuck it’ value.

There’s nothing to see here, just a video of Eli Manning and Daniel Jones playing a game of flip cup #GiantsPride pic.twitter.com/PJtL7tAi7O

After practice Thursday, Jones was asked about getting legless at a Hoboken bar with his two-time Super Bowl MVP backup.

It genuinely seems like the 22-year-old Jones enjoys being around Eli and the passing of the torch hasn’t drawn any bad blood.  When asked what kind of role Manning has stepped into for him this season, as a friend or mentor, Jones heaped praid on the 38-year-old.

It’s only a matter of time before Eli retires and commits his life to getting blind drunk on Gronk’s party cruise annually.