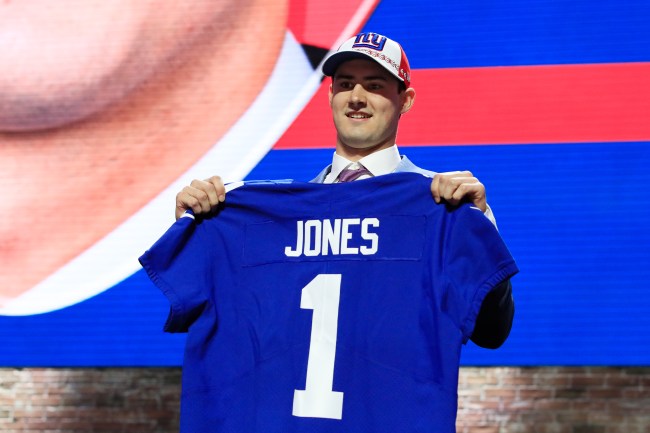 Daniel Jones has to be seesawing between extreme emotions. Whenever he’s not ecstatic for being selected 6th overall and setting himself up to be a millionaire, he’s likely glum from the droves of people who don’t think he deserves it.

Not a lot of love for the @Giants pick online over the last hour. 54% of posts with identifiable emotion represent anger and sadness … #GiantsDraft #NFLDraft pic.twitter.com/5J08E1V0Ul

It’s almost impossible to imagine that all the broken TV’s from Giants fans and online temper tantrums don’t affect the mindset of a 21-year-old kid who is the obvious choice for scapegoat if the G-Man don’t turn it around.

But, the former Duke QB seems to have a strong mindset, despite the external chaos. Jones said on SiriusXM NFL Radio’s “Late Hits” about the draft reaction:

“I haven’t paid too much mind to that. I think that’s key to playing quarterback, to being consistent as a quarterback, is keeping your head in the same place. I think that just comes down to your confidence in yourself, and your confidence has got to come from inside of you. I think if you’re looking externally for confidence, then you’re also going to be affected by the negative as well. Just finding confidence in yourself and knowing what you can do as a player, as a person, is kind of the way that works and the best way to think about handling a lot of that stuff.”

Jones added that he’s excited to learn from a future Hall of Famer in Eli Manning.

“I think it’s a tremendous opportunity for a young guy to go into a place where there’s a future Hall of Famer who’s done it for a really long time at a really high level and definitely knows what it takes,” Jones said. “So that to me is a big advantage in where I am right now. So I’m looking forward to it, just being teammates with him, being able to learn from him in the building every day. I think that’s a special opportunity. I’ve spoken to him once (since the draft) and he just congratulated me, said he’s excited to be up there. I think I understand he’s got a job to do, I’ve got a job to do, so we’re going to do the best we can to help the Giants win as many football games as we can, and I’m certainly happy with whatever my role is.”

If Jones ends up being a solid pick, he should be permitted to slap everyone who prematurely hated on him, both online and otherwise. The NFL Network should have a camera crew capture Jones going from house to house in New York and New Jersey just whacking dudes, like a reverse Make-A-Wish. I’d watch.