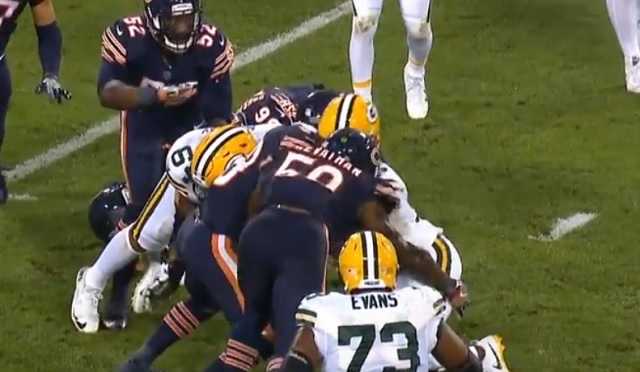 Chicago Bears linebacker Danny Trevathan let his frustrations get the best of him and it amounted to an ugly play, an ejection, and eventually a fine from the league. In the third quarter of the Packers 35-14 win over the Bears, Trevathan laid a brutal helmet-to-helmet hit on Packers wide receiver Davante Adams.

Adams was carted off the field as he laid motionless for a few minutes but eventually gave the thumbs up sign before being taken to the hospital on a stretcher. The Packers released an update at 11:40 pm last night indicating that Adams was conscious and had movement in all his extremities. Thank goodness, this looked like it could have been more severe…

Someone was quick to update Danny Trevathan's Wikipedia page after that hit on Davante Adams. His new position: Piece of Trash #packers pic.twitter.com/rJiFHVdAtl

Following the game, Trevathan was adamant that the hit was unintentional and he prays for Adams’ recovery.

“I realized it once he laid there for a while,” Trevathan said. “I saw his mouthpiece over there on the other side and he wasn’t moving and I saw his fingers twitching. I knew it wasn’t good. I just immediately dropped down and started praying.”

“I was just trying to make a play,” Trevathan asserted. “It wasn’t intentional. I was just trying to hustle to the ball and do my job. Unfortunately, he wound up hurt. I’m sorry about that. And I’m going to reach out to him and try to send him a message. We play a physical game. But you never wish that on anybody.”

Something tells me Packers fans ain’t going to buy that.