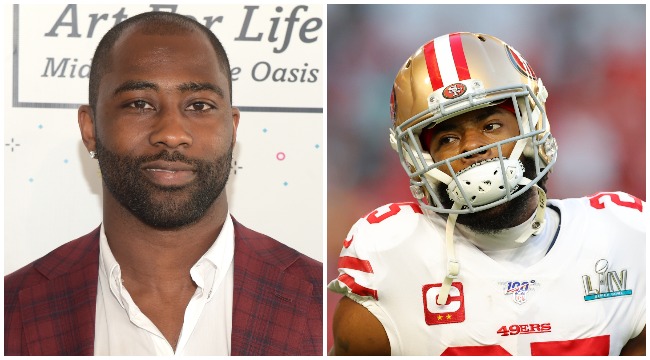 Somewhere on a desert island all by himself, a vindicated Darrelle Revis is partying like he just won his second Super Bowl. Instead of phoning for the Coast Guard, the retired 7-time Pro Bowler is watching the following clip until his phone battery dies out.

Richard Sherman getting burned by Sammy Watkins late in the fourth quarter to set up the eventual game-winning score is the ammo Revis needed to support his claim from two weeks ago that Sherman is scared of getting beat in man-to-man coverage so he hides in cover 3 zone.

Sherman responded by calling Revis a “has been” and gloated about preparing for a Super Bowl in his ninth season. In Revis’ ninth season–a year after signing a five-year, $70 million contract with the Jets–he had one of the worst showings of his career, with opposing quarterback ratings recorded at 91.7 compared to 59.3 his previous years.

But Revis’ doo doo season is gone and forgotten, and he can now relish in this damning photo of his nemesis:

Richard Sherman was talking hella shit to Darrelle Revis just to end up like this in the SB 💀 #SuperBowlLIV pic.twitter.com/Rz3DUnovbW

Just hours after Sherman lost his second heart-breaking Super Bowl, Revis hopped onto Twitter to bathe in his tears.

Revis didn’t need to say much else, fans from all corners of the internet did his work for him.

Revis when he saw Sherman get routed and took up top pic.twitter.com/2u3Y0TH9Fs

Revis: Richard Sherman you’re going to have to actually cover someone one, one on one during the SB

The internet is a cold, unforgiving place.