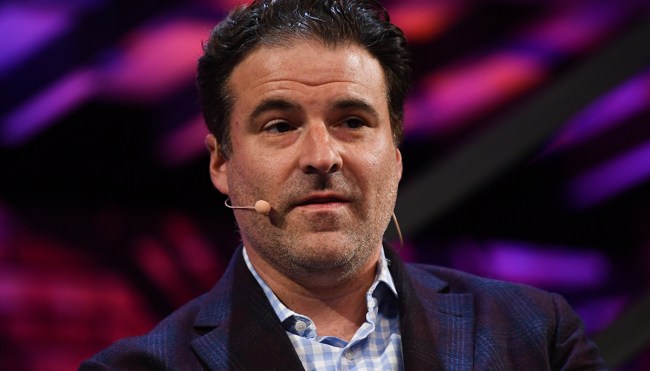 On Tuesday, the football world was rocked by the bombshell claims contained in the lawsuit Brian Flores filed against the NFL. In addition to accusing the New York Giants of conducting a sham interview, the man who spent the past three seasons coaching the Miami Dolphins claimed owner Stephen Ross offered to pay him $100,000 for every game the team lost over the course of the 2019 season.

Given the magnitude of the allegations, Tom Brady’s retirement was all but forgotten as basically everyone who covers the world of athletics turned their attention to the story. However, there was one person who remained suspiciously silent after the news broke: Darren Rovell.

Rovell—who made a name for himself as a sports business reporter at ESPN before turning his attention to the world of betting at The Action Network—is arguably best known for his crippling Twitter habit and tendency to milk even the most mildly interesting developments into the Tremendous Content he prides himself on.

As a result, you’d think he would’ve wasted no time chiming in on what immediately became the biggest story in sports. While he did have time to update his followers on how much money Gisele Bundchen has made, share an old picture of her husband, and call attention to an intriguing new offering at the Florida State Fair, his timeline has been absent of any mention to the Flores lawsuit.

What no one said 30 years ago: That kid is going to be the greatest quarterback that ever lived. pic.twitter.com/xuPt2mBykK

Ribbon-shaped potato chips with a chocolate and marshmallow drizzle and graham cracker sprinkles.

The Action Network did acknowledge a few of the allegations in a tweet, but as of this writing, it has not been mentioned in any stories on the outlet’s website.

You’d think an NFL owner allegedly offering a coach money to throw games would be of interest to an operation that’s primarily dedicated to sports betting; when you consider The Action Network has published multiple stories concerning the impact minor stat corrections have had on NBA prop bets in recent weeks, it seems like accusations concerning billionaire bribing his guy on the sidelines to lose would be more than enough to garner similar coverage.

However, as plenty of people have since pointed out, the billionaire at the center of the issue previously used some of his fortune to invest in The Action Network during a fundraising round in 2019 (after Ross’ involvement was disclosed, CEO Patrick Keane noted “to be able to call on the counsel of these kinds of owners is super-helpful to the company”).

Stephen Ross was reported in Nov. 2019 to have invested into a sports gambling startup as part of a $17.5M fundraising round. https://t.co/5lg27kg4MC

If an NFL team owner is investing in sports gambling while incentivizing his head coach to lose games, that’s a gigantic issue.

It would appear Ross no longer has a stake in The Action Network, as the company was fully acquired in a $240 million sale last year. However, that makes Rovell’s silence on the Flores matter even more interesting, as there doesn’t appear to be any real incentive for him to abstain from commenting on it unless there’s something he’s attempting to preserve or a conflict that has not yet been brought to the public’s attention.

After he was pressed about it on Wednesday, he issued an explanation for why he hasn’t addressed the “interesting” story with a twist on the “doing my own research” line that’s become increasingly popular over the past year or so.

it's an interesting story and we're looking into the veracity of it?

When you consider basically every major media organization on the planet has decided there’s enough meat on the bone to cover the issue, it’s kind of hard to buy that excuse. Regardless, I look forward to the results of Rovell’s investigation.