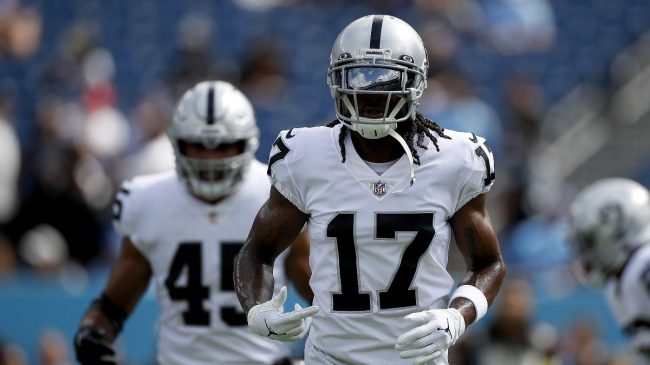 The Las Vegas Raiders find themselves 0-3 to begin the season, which isn’t what this franchise had in mind at all. They had big hopes after trading for Davante Adams, but he and Derek Carr have yet to rekindle their chemistry from college. Now, the superstar receiver is calling out Green Bay Packers fans, and the cheeseheads aren’t happy about it.

Since going off in Week 1, we haven’t seen Davante Adams and Derek Carr connect nearly as efficiently. Additionally, the Packers are currently 2-1 while Vegas sits 0-3. However, it sounds like Adams is attempting to remain focused on improving his chemistry with Carr so the Raiders can start earning wins.

However, it sounds like Adams is getting tired of stats being thrown around. According to SportsCenter, the Raiders star claims, “All the Green Bay people will definitely still be on that trying to compare the stats and all that. But we’re not doing this thing for stats at the end of the day.” Packers Nation didn’t seem to happy with this quote, as they feel Davante Adams directly called them out.

Davante Adams isn't focused on stats as he adjusts to his new team 🙅‍♂️ pic.twitter.com/G2qg3ndVG4

Although Adams hasn’t quite looked the same since leaving Green Bay and Aaron Rodgers, he’s likely to get the ball rolling soon. Despite that, the cheeseheads made sure to let Davante Adams know of their displeasure.

This is something you say when you’re 0-3 and feel like maybe you see why playing with a lack luster qb who’s had like 10 years to prove himself maybe wasn’t bright. But sure yeah not for stats.

This seems to check out.

Blaming the “Green Bay people” when the entire NFL universe was comparing Adams’ stats to packers WRs week 1 is hilarious ngl. He didn’t seem to take issue with it then 🤔

Packers fans clearly have Aaron Rodgers’ back through the thick and thin.

@tae15adams you must of forgotten those “GB people” supported you for those years you couldn’t catch a ball. You forget about that bc the last 3 your STATS went off bc of that HOF QB you were playing with. Look at you now with your other HOF QB🤣🤷🏻‍♀️ NUMBERS DON’T LIE!!!!

We’ll see how the remainder of the season plays out for Davante Adams and the Raiders. The franchise is running out of time though, as an 0-3 start is less than ideal. Look for them to potentially get their first win of the year in Week 4 against the Denver Broncos.