Deebo Samuel, George Kittle, And Other 49ers Come To The Defense Of Javon Kinlaw Following Feud With Reporter 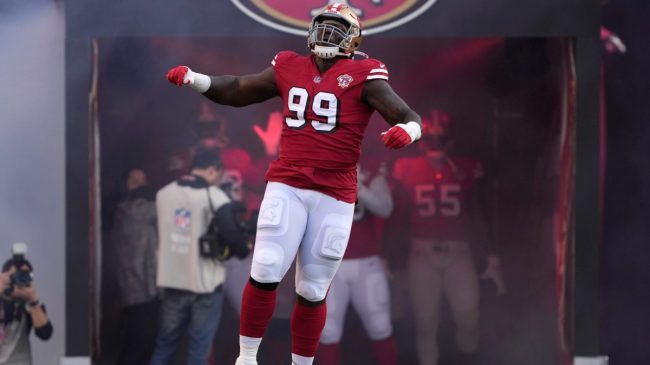 Javon Kinlaw made headlines on Wednesday morning after going off on a local reporter in a recent interview.

The San Francisco defensive lineman called out Grant Cohn, who’s become hated by not only Kinlaw, but a number of his 49er teammates.

In the heated argument, the 6-foot-6 defender says that his “balls are bigger” than Cohn’s and that the journalist should put some respect on his name.

The incident stemmed from Cohn’s constant berating of Kinlaw on his FanNation site, an affiliate of Sports Illustrated. He’s shown a disdain for the lineman since his being selected in the first round of the 2020 NFL Draft. That includes saying that he has the years of an 80-year-old, and that the organization should’ve passed him over.

There was also an altercation where Cohn alleges that Kinlaw knocked his hat off at a team practice and began calling him a obscenities.

Apparently, Kinlaw had finally had enough, and he flipped.

Cohn then went on to brag about the altercation, saying that he could’ve sued Kinlaw and retired a millionaire had Kinlaw taken things to the next level, almost as if he was baiting the big man into a reaction. It’s not hard to see why he’s disliked.

A number of San Francisco teammates have grown tired of Cohn’s schtick, and they’ve come out in support of Kinlaw following Wednesday’s outburst.

49ers back Javon Kinlaw in his feud with a local reporter

Some notable players came out to back their teammate following the incident. Those included superstars Deebo Samuel, George Kittle, and Raheem Mostert.

Here were their responses.

We’re always told journalists and reporters have a job to do. Ok, understood. But this??! He admitted “retirement” as a “multi-millionaire” went through his mind. THIS is unacceptable, @nfl @49ers.

George Kittle and Raheem Mostert spoke on Cohn’s constant antagonizing of 49ers players, saying that it’s crazy that he’s allowed into the building.

“It’s crazy to me that someone who is allowed into our building has the mindset/goal to antagonize and irritate players with their endgame being this… Everyone is entitled to their own opinion but continuing to go after a player habitually seems like someone who’s goal isn’t to report or write a story.”

This is the type of low life we let into our building. He would rather antagonize and provoke players into hitting him so he can retire instead of doing his “job“ of journalism. pic.twitter.com/jL5ZGTq8yZ

Deebo Samuel responded by saying he’s had Cohn blocked for some time.

In all, there have been nearly a dozen 49ers to speak publicly on the situation. Not surprisingly, all have backed Kinlaw.

Players that have spoken on the Javon Kinlaw / Grant Cohn situation:

Kinlaw went about his disagreement with Cohn the wrong way, but it doesn’t seem like many are siding with the reporter.