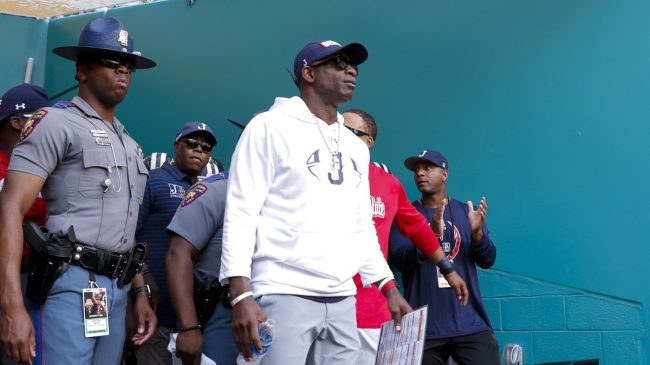 Deion Sanders has quickly become one of the country’s most sought-after college football coaches. The man they used to call Neon Deion has transformed Jackson State into one of the top Division I FCS programs in the nation.

Sanders took over the program in 2020 and within two seasons led the Tigers to an 11-2 record and Top-25 finish in the polls.

Though his most significant success came on the recruiting trail. Sanders shocked the country when he flipped Travis Hunter, the No. 1 prospect in the 2022 class, from his alma mater Florida State to Jackson State on signing day.

Sanders has also documented most of his success, either on YouTube or social media, giving fans an inside look into the Jackson State program. We’ve seen videos of Sanders having his kicker translate postgame speeches into Spanish. Then there’s the time he called out his players for using his private, luxury bathroom.

But if there’s one thing that Prime Time appears to hate more than anything, it’s players using their cellphones in the locker room.

He first erupted at his players over the issue prior to a game late in the 2021 season.

Now it appears Sanders is back at it, and he’s not messing around.

“What’s so important that you got to check a phone right now,” he yelled prior to the Jaguars’ week one victory. “What’s that important other than where you are? This is the moment, stay in it! Lock in.”

Let’s just hope any athletic director looking to get Sanders on board doesn’t try to reach him while he’s coaching a game.