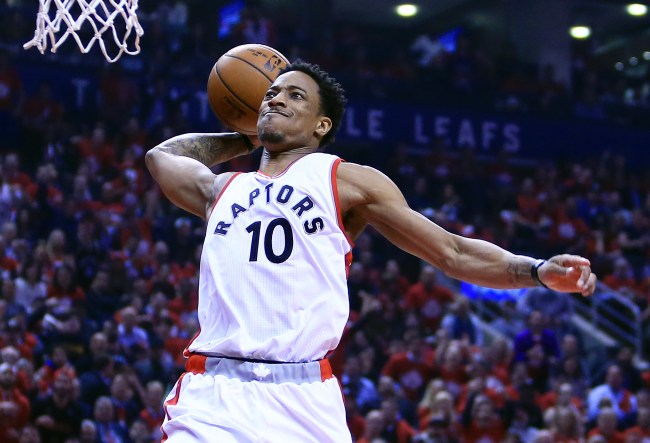 For one of the best players in the NBA, DeMar DeRozan’s name isn’t called nearly as much as it should be. But, after the introverted Raptors guard executed one of the filthiest highlights of NBA season, his name is being plastered all over the world wide web today.

Last night in an away game against the Detroit Pistons, DeRozan dropped 42 points in a 121-119 overtime win. With 10.1 seconds left in the 4th quarter and his team trailing 112-111, DeRozan aggressively drove the entire length of the court and threw down a thunderous And-1 dunk over Anthony Tolliver, nearly ending his career.

This is NSFW. World-class.

DeRozan made the free throw to put his Eastern Conference-leading Raptors up 114-112. But, newly acquired Blake Griffin had an answer, sending the game to overtime.

In OT, with the game knotted up at 119 a piece and 8 seconds on the clock, DeRozan went full steam ahead. This time, the Pistons would not be embarrassed, with four players descending on his drive to the basket. DeRozan felt the pressure and kicked it to a wide open Fred VanVleet in the corner who drilled a long two and won the game for Toronto, 121-119.

Fred VanVleet knocks down the corner jumper to seal it for the @Raptors!#WeTheNorth pic.twitter.com/XTKCXVjknm

The Raptors win clinched a playoff spot for the Raptors, and put them up 2.5 games ahead of the Boston Celtics in the East.