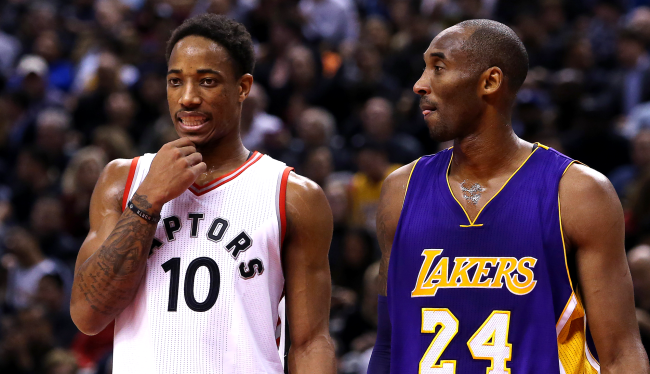 The stories of NBA greats like Michael Jordan, Larry Bird and Kobe Bryant talking trash to their opponents are the stuff of legends.

Just when you think you have heard them all, one more pops up and makes you shake your head at the unrelenting competitive drive these superstars had.

This week, another new legendary trash talk story was told about one of these all time greats by Chicago Bulls star DeMar DeRozan.

During his appearance on Serge Ibaka’s show How Hungry Are You?, DeRozan explained that Kobe Bryant once trash talked him so bad during a game that it changed what sneakers he wore on the court from that day forward.

“The relationship we had, I always wore his shoes,” DeRozan told Ibaka. “I remember walking out and the first thing he did was look at my feet. I was like, ‘Nah, I’m not wearing his shoes. I’m playing against him tonight’, so I wore Jordans.

“And he said, ‘What the f–k you got those on for?’ He was mad at me for doing that and he ended up hitting the game-winner on us that night, too. Talking trash the whole night and everything. Ever since then, I ain’t never put another pair of Jordans on.”

DeRozan also told Ibaka that playing Kobe Bryant in a pickup game was no different than playing him on an NBA court.

“It was the same,” said DeRozan. “Same mentality, same approach, same trash talking, same aggressiveness. That’s what you gotta love about him.”