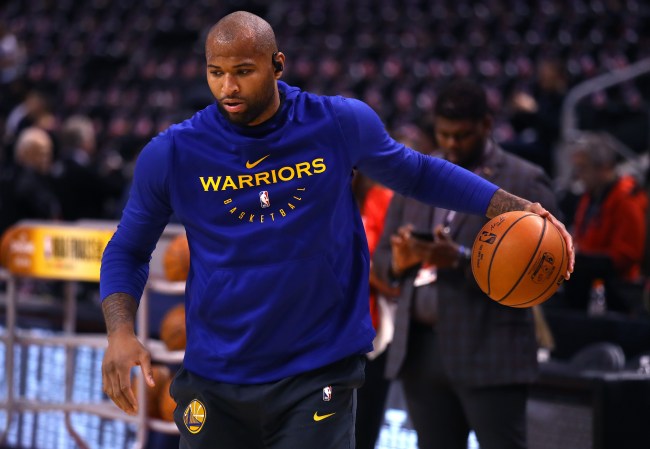 DeMarcus Cousins has, surprisingly, worked his way back from a nasty quad injury that occurred during the Golden State Warriors’ opening round playoff series against the Los Angeles Clippers. For those who don’t remember just how gross it was, the big man was seen limping into the locker room with a quad muscle that was bulging out of his leg like a speed bump in the road, so it’s remarkable that Cousins was able to return this season — even if it has been slowly over the past few games.

Given the amount of injuries to other key guys on the Warriors — something DeMarcus Cousins poked fun at on social media following the team’s Game 2 win in the NBA Finals — Boogie’s being asked to do a little more than what his body might want him to do, but, hey, nobody said winning a championship would be easy. You’ve got to lay it all on the line, right? That doesn’t mean the recent injury Cousins sustained wasn’t a huge blow to him; both physically and mentally.

In a one-on-one interview with ESPN‘s Rachel Nichols, Cousins opened up candidly about how much the quad injury really impacted his psyche, saying that it got so bad that he even thought about quitting basketball. Take a look at what the four-time All-Star had to say.

“I would be lying to say I didn’t really have to [fight to get back so soon],” Cousins said of the quad tear. “Like, I had to dig deep. I had to do some soul-searching and, you know, throughout both injuries, it was times where I just — you know, like, ‘Forget it.’ Like, I’ll just take my time with it and whatever happens, happens. And f—, I just couldn’t go out that way.”

Cousins said he struggled to get into the right frame of mind to get back on the court.

“I was just ready to quit,” Cousins said. “Like, throw the towel in. … Human nature is the first thing. It’s like, ‘Why? Why me? Why now? What did I do wrong? Why do I deserve this?’ And that’s not always the case. It’s usually [that] it’s repaying you for the next moment.”

Given that kind of mindset, it’s really incredible that DeMarcus Cousins is back to playing again. Not just because of that physical hold up, but, more than anything, the mental barrier that he had to overcome in order to find the motivation to get back on the court. Rather than use it as a distraction, though, he said it opened up his eyes a little bit about how quickly things can be taken away — which is why he’s doing everything he can now to help his team win another title.

“I know the feeling of like, you know, this might be it. You know?” Cousins told ESPN’s Rachel Nichols in an interview on The Jump on Wednesday. “So every chance I get to be on the floor, I’m gonna leave it on the floor. Because, you know, this is a game I’ve played my entire life and I’ve grown to love since I was a kid.

“And, you know, as much as I loved it then, I love it now. And I know how fast it can be taken away. It can be gone with the snap of a finger.”

“That’s what it’s about,” Cousins said. “Leaving it all on the floor and trying to make the best play and the right play every possession. And I think we, as a team, did that in Game 2 and we were the better team that night.”

Although the majority of America is rooting against Golden State in the NBA Finals, one person it’s hard to root against is DeMarcus Cousins, because, after tearing his Achilles last season and then suffering this quad injury early in the playoffs, he’s done everything he can to work his way back. That type of hustle should be applauded.