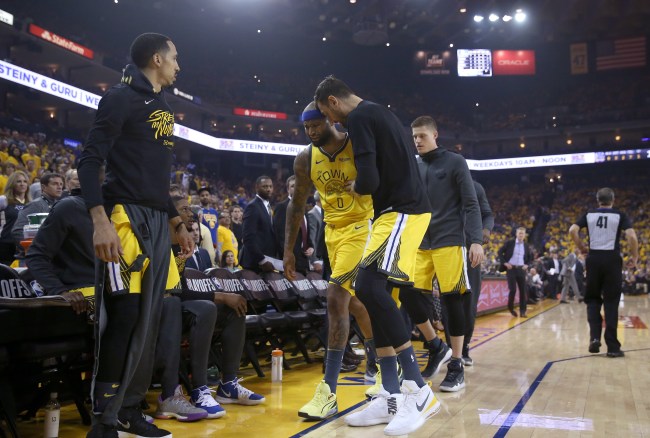 DeMarcus Cousins has had some seriously bad luck over the past two seasons. For about half of last year while still with the New Orleans Pelicans, the man known as Boogie was playing like the perennial All-Star he is, putting up double-doubles at ease and setting himself up for a nice payday last summer as a free agent. Then, he ripped his Achilles, ending his season and forcing him to work back from a devastating injury for a big man. Just when he looked like his old self this year as a member of the Golden State Warriors, boom, Cousins goes down in the NBA Playoffs with a blown out quad that looks hella nasty.

When healthy, DeMarcus Cousins is one of the best big men in the league. Sadly, the 28-year-old might be running out of time to get that big contract that he’s earned through his previous seasons in the league, where he routinely averages around 20 and 10. Given the fact that Boogie is damaged goods now, a few NBA execs opened up about just how much money DeMarcus may have lost in salary now — and, oh man, is it a sh*t ton.

In a recent Bleacher Report feature about DeMarcus Cousins, here’s what some of the front-office people had to share.

“It’s going to be an enormous loss for him,” a Western Conference executive told Bleacher Report. “He might end up in a situation where these injuries cost him $150 million. It’ll have a profound impact.”

Another Western Conference executive told B/R that Cousins’ body of work this season wouldn’t have justified more than another one-year deal in the marketplace this summer, anyway. If that’s the case, Cousins’ latest setback won’t change much.

But even if Cousins commands only a one-year deal, it remains all but certain that it will not be with the Warriors. Golden State does not have his Bird rights and can only offer him a salary of $6.4 million—a 20 percent raise.

At least one executive disagrees with that sentiment, though. While DeMarcus Cousins is currently on a one-year deal for $5.3 million this season with the Warriors, this particular person said that the big man could reap some financial benefits from a team willing to spend that misses out on another top free agent, like Kevin Durant.

“If you’re chasing Kevin Durant and you don’t get him, what’s the next option?” the executive said. “Do you settle for Khris Middleton or Tobias Harris? A lot of teams are going to be left at the altar and are going to have to pay the max to someone who doesn’t deserve it.”

Thus, even if he’s unable to secure a multiyear deal, Cousins could still stand to get a one-year payday between $10 million and $15 million from a team itching to spend.

“He’ll be the Lakers’ or the Knicks’ consolation prize,” one of the Western Conference execs said.

But given his injury history the past couple seasons, a doctor, Dr. Kingsley Yew, a physical therapist and founder of Evolve To Perform Physiotherapy, offered some warning to any potential NBA team who might consider handing DeMarcus Cousins a boatload of money — or, hell, even anything outside of a one-year deal in double digits, strictly saying the risk is high for re-injury.

“Achilles to quad, that’s definitely to me a synergistic pattern of wear,” Yew said. “If you’re lacking the strength, mobility and elasticity of the Achilles, you’re going to chronically send stress upstream to that other group of musculature. He’s going to make any general manager nervous…’Can we count on this guy?'”

Who would have ever thought that, in a matter of about 15 months, this is where it’d be with DeMarcus Cousins? It’s devastating to see a guy who should just be entering his prime have so many question marks about his long-term health in the NBA, and missing out on a potential $150 million in salary has to hurt more than anything he’s had to overcome with his injuries the past couple seasons.