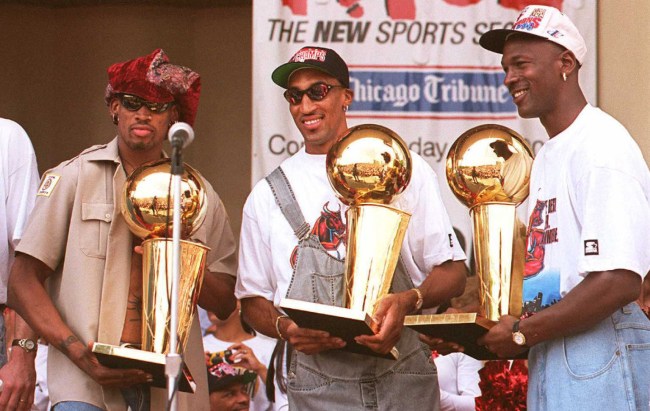 Dennis Rodman won five NBA titles and earned a spot in the Basketball Hall of Fame, so one would imagine he knows a thing or two about talent. After all, “The Worm” was a member of the Bad Boy Detroit Pistons teams with Isiah Thomas and Bill Laimbeer — where he won his first two championships — and then joined the Chicago Bulls for their second three-peat, playing with guys like Michael Jordan and Scottie Pippen.

As great of a basketball player as Rodman was, though, he was even better at drawing attention to himself, with the former two-time Defensive Player of the Year dating women like Carmen Electra at one point, and even showing up to his own book signing in a wedding dress. To use the word “flamboyant” to describe the guy would be more than accurate.

But Dennis Rodman is getting some attention this week for something he claimed about one of his former teammates, Pippen, and, arguably, the greatest current basketball player on the planet, LeBron James.

In most conversations, James is compared to Michael Jordan, with a hot debate about which player is the proverbial GOAT — which, according to a recent poll, is a really tight battle. But, in Rodman’s mind, LeBron’s game should most be compared to Pippen’s, and “The Worm” thinks that Pip would actually be better than James if they both played during the same era in the ’90s.

While talking to ESPN‘s Jackie MacMullan, Dennis Rodman said all these athletic big men (otherwise known as stretch fours), should be praising and thanking Scottie Pippen for creating the position to begin with. And, when putting his former Bulls teammate against anyone else, Rodman was sticking with his own guy — even proclaiming he was the second-best player in the NBA during the ’90s.

“He revolutionized the point-forward position. All these players today should thank Scottie Pippen,” Rodman told Jackie MacMullan of ESPN. “Guys like Kevin Durant should say, ‘Wow, look what you did for us.’ Scottie could handle, he could shoot the ball, he could defend, he could rebound.

“If LeBron was playing during the ’90s, I’d still say Scottie Pippen was the second-best player behind Michael.”

There’s no denying the fact that Scottie Pippen was a top-10 player during his heyday in the league, but Rodman’s claim that he was the second-best player is a bit extreme. Even more so, saying LeBron James wouldn’t be as good as Pippen during the ’90s is a major shot at the four-time league MVP and three-time NBA champ, because James could, presumably, hold his own against the rough and tough teams of that era.

It’s always fun debating eras and different players, but, when looking purely at the stats, it’s hard to side with Dennis Rodman’s stance here. Remember, though, Pippen played Robin to Jordan’s Batman, whereas LeBron has always been the leading man — even when playing alongside other All-Stars and future Hall of Famers.

The fact of the matter is this: The game is way different now than it was then. There are more opportunities to score than back then. There are more athletic freaks. There are less traditional positions now. So, while it’s great giving an opinion about which player might be better or tougher, we’ll, unfortunately, never know if Scottie Pippen would be better than LeBron James if they both played in the same era — although Dennis Rodman states his case by giving mad respect to his former teammate.