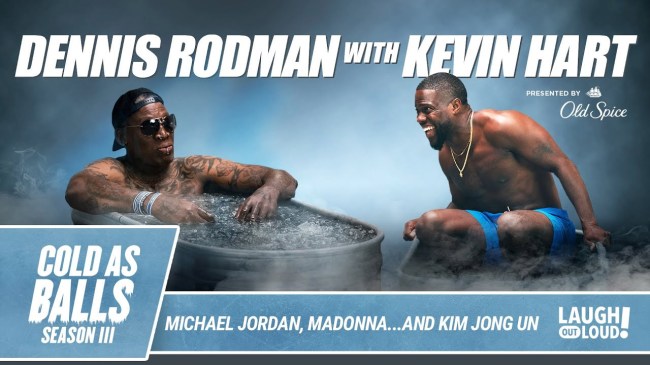 Last season, Kevin Hart was killing it with the list of guests on his YouTube show Cold As Balls.

He had people like Floyd Mayweather, Baker Mayfield, Ronda Rousey, Russell Westbrook, and Bubba Wallace on the show and they were all entertaining AF.

This year, for season three of Cold As Balls, Hart has already brought out one of his big guns just two episodes in: Dennis Rodman.

As is always the case with Dennis Rodman, his interview was filled with a whole lot of TMI on subjects ranging from Michael Jordan to Madonna to Kim Jong Un and much more, including the fact that, by his count, he’s been sent to jail over 100 times in his life.

He also revealed to Hart that the story about him breaking his d*ck three times is the truth. Yeah… Although Dennis says the medical term for that is a “contusion of your c*ck.” Yeah…

That happened less than 3-1/2 minutes into the show. It only got weirder from there as Rodman talked about being traded to the Bulls for Will Perdue, the time he rocked the sports world by wearing a wedding dress to a book signing, getting threatened with being kicked out of the NBA by commissioner David Stern over his many tattoos, being married to Carmen Electra, dating Madonna, and his relationship with Kim Jong Un (huge Michael Jordan fan).

It’s quite a wild ride, as one would expect anytime Dennis Rodman is involved.