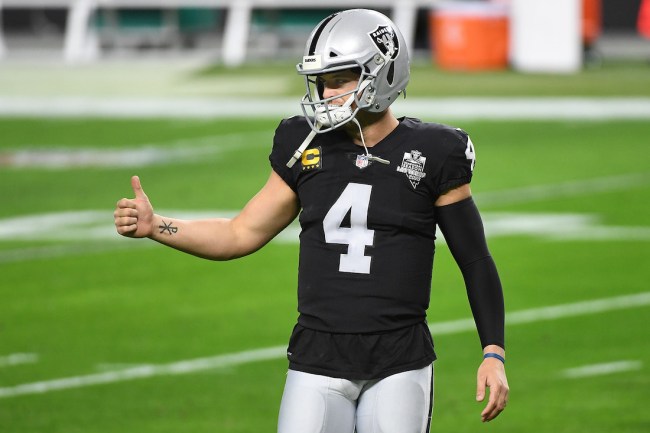 Ever since Derek Carr was selected in the second round by the Las Vegas Raiders franchise in 2014, the relationship with fans has been… fragile. That’s not to say it’s combative, but it has been one where the quarterback has received harsh criticism, with many wondering when the franchise will move on from the three-time Pro Bowler.

One of those instances came during the 2020 NFL offseason when rumors swirled that Tom Brady was possibly interested in joining the Raiders. Many believed that the team would try to make a splash as it moved from Oakland, and, given head coach Jon Gruden’s propensity for star quarterbacks, just maybe, the GOAT would be taking over for Carr.

It didn’t happen. Instead, Brady signed with the Tampa Bay Buccaneers, won his seventh Super Bowl and further etched his name in the record books as the best ever.

While Derek Carr had a good 2020 season, it obviously raised questions about his future in Las Vegas. He addressed those earlier this NFL offseason by declaring he’d “retire” rather than play for another team. Now that’s commitment.

Adding fuel to the fire about Carr’s future was this: A viral video clip of Brady on HBO’s The Shop talking about his free agency last year. The clip made the rounds after the GOAT described his shocked reaction to a team telling him they were sticking with their current starter under center.

There were some theories as to whom Tom Brady was referring to in the clip, but Derek Carr’s name seemed to be one that really stood out.

But Carr was asked about the clip during a recent appearance on the Brother from Another podcast, and claims somebody told him that Brady wasn’t referring to him.

“From what I know, it wasn’t me, which is good,” Carr said on “Brother from Another” on Wednesday.

“If it was, I’ve gotten in enough trouble trying to challenge people to fights. But, as a man, Tom, I know you got the rings, but if it’s not me then we’re good. What I heard, it wasn’t me, and so I’m good with that.”

Carr declined to name names, but he said he received the info from “a good source.”

It’s interesting to hear starting quarterbacks around the league like Derek Carr have to answer questions about some viral clip like this. But, hey, it goes to show the power that a guy like Tom Brady has, who not-so-quietly could’ve been referring to any player in the NFL in The Shop video.

Then again, Brady is a pro at playing up the media, and even admitted that “90 percent” of what he says during press conferences is pretty much a lie. Maybe he was doing the same thing on The Shop in order to do just what it did: Get attention.

Whether Brady was talking about Derek Carr, Jimmy Garoppolo or somebody else, we may never know the truth — or, worse, if the Tampa Bay Buccaneers quarterback was even telling the truth about the story to begin with.