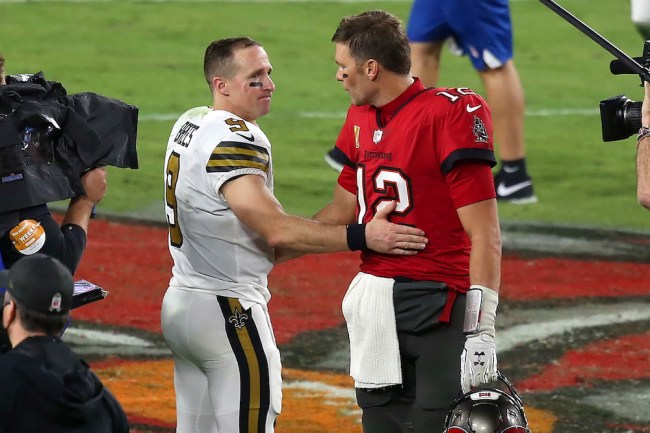 Looking back at Tom Brady’s free agency from the 2020 NFL offseason, it’s pretty wild to think that the future Hall of Famer ended up signing with the Tampa Bay Buccaneers. Well, OK, maybe there were hints — like Peter King predicting it before it happened — so it might have been more surprising that the GOAT ended up winning a Super Bowl in his first season with the NFC South team.

But before all the dust settled and Brady landed with the Bucs, there were plenty of rumors about where the now seven-time Super Bowl champ would end up. Nobody knew if he’d stay with the Patriots. Some thought he’d return to his home state in California and play for the 49ers. And there were even rumors that the quarterback was looking to make a serious splash by kicking off the new era in Las Vegas with the Raiders.

There was also one other team reportedly to be seriously in the mix for Tom Brady: The New Orleans Saints, who were waiting to see if their own future Hall of Fame signal-caller, Drew Brees, was returning for another season or not. Brees did decide to comeback for the 2020 campaign, meaning signing Brady was off the table. Prior to hearing that news, though, some believed the Saints were the frontrunners for Brady.

Fast-forward to this week, and Tom Brady’s free agency is getting some rejuvenated attention. That’s because a clip from HBO’s The Shop showed the quarterback jokingly trash-talking about an organization which gave up its pursuit of him last offseason, with the quarterback saying, “You’re sticking with that motherf***er?”

Nobody knows the franchise Brady was referring to — and we may never find out — but there are tons of hunches. Hell, even our own Mark Harris tossed around some theories about it.

But Jeff Darlington thinks it’s clear as day that Tom Brady was talking about the Saints, and was just taking a friendly jab at Drew Brees. Here’s what the ESPN insider had to say on Tuesday’s Get Up about the whole situation.

“I’m gonna say it as clear as day: it’s the New Orleans Saints,” Darlington said. “Regret might be a strong word because ultimately Drew Brees decided to delay his broadcasting career and come back for one more season. The Saints did the right thing by bringing Brees back. But I think that people still underestimate how close Tom Brady was to signing with the New Orleans Saints up until he ultimately decided on the Bucs. I know that that’s gonna be a statement people try to question. It’s the truth.”

Imagine being the Saints last offseason and having to decide between Drew Brees or Tom Brady — which, reportedly, happened. That’s like winning the quarterback lottery, and left the team with plenty of options.

Ultimately, Brees returned and Brady signed with the Bucs. But knowing these two guys respect one another and will go down as two of the greatest signal-callers in NFL history, Jeff Darlington’s theory about the viral clip from The Shop referring to the Saints actually makes a helluva lot of sense.