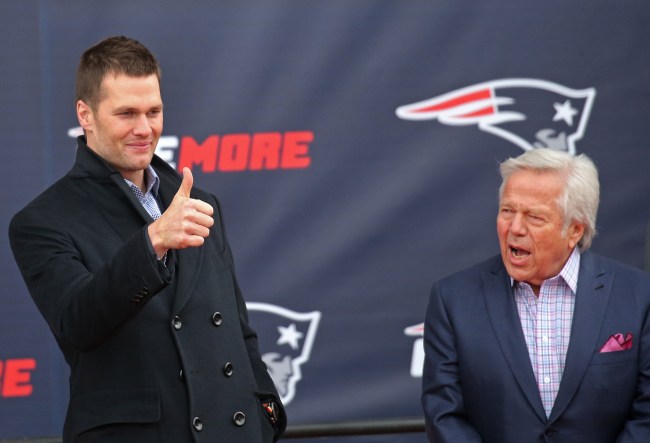 Every single day, Tom Brady rumors seem to litter our news feeds and TV screens, with reports coming out that the six-time Super Bowl winning quarterback is either definitely staying with the New England Patriots, or definitely leaving to join some random team. While nobody knows for sure what’s going to happen, spreading these rumors seems to be more contagious than the coronavirus, with media people constantly giving updates on what they hear from unnamed sources.

Go ahead and read these with a grain of salt (for now), because the Tom Brady rumors will keep coming and coming until NFL free agency begins on March 18. Until then, be prepared to see and hear plenty of interesting updates as to what the future Hall of Famer might do next.

However, one person who does seem to be in the know on Brady’s pending free agency is ESPN’s Field Yates, who has been around the team for more than a decade. And, although Yates doesn’t have some groundbreaking insider info about the Brady-Pats negotiations, he did offer some interesting nuggets on Twitter the other day, when he said that the team still has no idea what in the hell the GOAT even wants yet. Take a look below at Yates’ series of tweets detailing what he’s heard.

As we approach free agency, some notes (in a thread) to revisit as Tom Brady’s decision on his next step draws closer.

During last training camp, Brady & the Patriots discussed a new deal, including a multi-year extension. Brady’s preference was to not add any years to his deal.

and include a no-tag provision in his deal to ensure him the right to test the market if he desired. Early in camp, the Patriots gave Brady his request for total freedom after 2019. Brady now has that opportunity to be a free agent.

Many have wondered when the Patriots will make their offer to retain Brady, something that they did in August already. In essence, the next step is Brady conveying what he wants in a new deal from the Patriots, not the other way around, as the team has previously presented him…

an offer, but Brady wanted to test the market, which has now has the chance to do.

The chance for Brady to return to New England is of course possible, but an important step in that process is an understanding for the team of what Brady is seeking in a new deal.

That might not seem like a huge deal to some people, but considering Tom Brady’s set to become a free agent in about 10 days and his current team still has zero clue about what he’s looking for seems to be a red flag. The Pats are currently the only team that can negotiate with Brady, and, while the quarterback has said he’d like to hit free agency for a number of different reasons — and, per Yates’ tweets, the team is OK with him doing that — it’s not a good sign that the two sides haven’t at least set a starting point.

According to Yates, the team is sitting back and waiting for the greatest quarterback of all-time to make the first move in a stand-off because they believe their contract offer in August is making them oblivious as to what he wants. It’s a risky game of chicken, and one that could lead to further tension between themselves and Brady.

Previous reports claimed that the Pats want Tom Brady to hit free agency and negotiate with other teams before coming back to them — which, again, is risky — and some think he’s in line for a deal over $100 million. What happens if the quarterback gets an offer he can’t refuse and then stands up New England, never giving them the chance to counter? It’d be a messy breakup that would leave No. 12 the villain.

There are plenty of Tom Brady rumors floating around out there — with some recent ones pointing to a conversation he had with Bill Belichick — and they all seem to be hinting at the quarterback leaving. Who knows if that actually happens or not, but, based off of Field Yates’ report above, it doesn’t seem as if Brady’s giving many favors to his current team in terms of having an edge on any other franchise who might be interested in signing him.