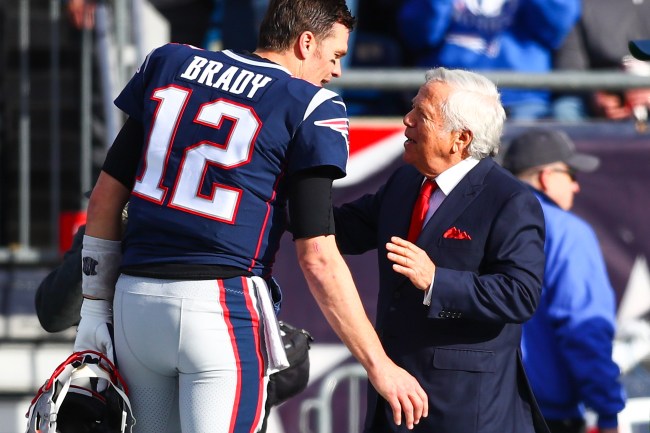 The Tom Brady free agency saga is just that, a saga, with new reports seemingly leaking out every single day about where the six-time Super Bowl winning quarterback may or may not go this NFL offseason. Could the GOAT really leave the only franchise he’s ever known — the New England Patriots — and head somewhere like the Los Angeles Chargers, the Las Vegas Raiders, the Tennessee Titans or somewhere else? It’s a real possibility, according to reports, and it’s the biggest storyline in the league as the free agency period opens up in the next couple of weeks.

The fact that we’re talking about a 42-year-old quarterback so much is the ultimate sign of respect towards Brady, who has those six rings, multiple individual accolades and a bunch of passing records on his resume. I mean, it’s not every day that someone that old would be one of the most coveted players available, but, when it comes to the Tom Brady free agency story, as we’ve already seen to this point, it seems like every franchise would love the chance to add the future Hall of Famer.

While Brady sits and waits for his moment to start negotiating with teams — which will, undoubtedly, include the Patriots — ESPN’s Adam Schefter gave a critical update about the current state of the process. Some fans are freaking out about reports that both sides have yet to engage in any negotiations, with the hope that the signal-caller won’t even get a chance to hit the open market before March 18. However, Shefty provided a simple reason why neither side is eager to start talking; and it has to do with the current Collective Bargaining Agreement (CBA), which is trying to be worked out before it expires after the 2020 season. Take a look at what the longtime NFL reporter had to say below.

Discussions surrounding a potential new CBA have held up any potential contract discussions between the Patriots and Tom Brady, per sources. pic.twitter.com/CQ5508BJRa

Schefter’s report definitely doesn’t offer Patriots’ fans much relief from the panic of imagining Brady ending up with a different franchise, but, until the NFL and the NFLPA can finalize a new CBA, the process of the quarterback and the franchise even discussing contract terms is stalled. Talk about nerve-wracking for those in New England, right?

There’s talk that the Tom Brady free agency saga could end with the quarterback landing a $100 million contract, which is nuts for somebody his age. And with reports that the Pats are willing to let their longtime face of the franchise test the market and allow him to talk with other teams before negotiating with him, it’s a tense time in Foxborough. Who knows if he’ll end up leaving, but the drama surrounding the decision is part of what makes sports so great; unless you’re a Pats fan.