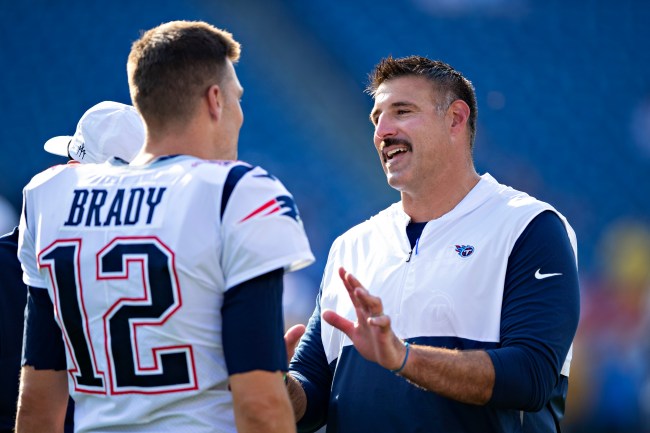 Mike Vrabel isn’t stupid, so he knows that any little hint that can be found about Tom Brady’s free agency is going to be turned into a big story. And, in case the Tennessee Titans head coach needed a reminder of that, look no further than a couple of weeks ago, when he was caught FaceTiming with Brady and Julian Edelman during a Syracuse men’s hoops game — which really caused a stir on the Internet.

People wondered why Vrabel and Brady could possibly do such a thing. The Internet wondered if it was the first sign that the six-time Super Bowl winning quarterback was leaving New England for Tennessee. People on Twitter deciphered what Brady may have uttered after Edelman proudly proclaimed “he’s coming back,” into the camera — which immediately got a side eye from the GOAT. Could a harmless FaceTime call really be the way the world found out Tom Brady’s free agency plans? If you ask Mike Vrabel, people shouldn’t be reading into it too much.

While appearing on NFL Network’s Good Morning Football, the Titans head coach detailed the context of the face-to-face with Brady, and downplayed the reason the two talked. Simply put, he was just having a call with a good buddy.

“It would be no different than a conversation you would have with two of your (friends) on a weekend,” said Vrabel, Brady’s teammate for eight seasons in the early 2000s. “And listen, my relationship goes back to 2001 with Tom Brady and training camp at (Bryant College in) Rhode Island (and) Parente’s. We’d go practice, and a bunch of us would go to the bar at Parente’s after practice, and that’s where a lot of those friendships were made. And those friendships aren’t going to stop or not continue to grow and develop now that I’m a head coach and he’s a quarterback with an expiring contract. Those are going to continue on well after he’s done playing — with his family, with my family.

“And having the ability to meet Jules and all those players, there’s a special bond that goes on in the locker room, and that’s not going to stop, the same way that Larry Izzo or Tedy Bruschi or Willie McGinest or Wes Welker and Matt Cassel and I will have a relationship.”

This is pretty hilarious by Mike Vrabel, to be honest. Sure, we all understand that he and Brady have been tight for the past 20 years and were just catching up, but, c’mon, don’t be so ignorant to think that the Internet wasn’t going to run with this and turn it into a major headline about Brady’s upcoming free agency plans. To think they could be that coy is straight up asinine. Sorry, but it’s a helluva lot different than Vrabel talking to Izzo, Bruschi, McGinest or Welker — because neither of them happen to be the biggest free agent in NFL history.

Given the parties involved here — Vrabel, Brady and Edelman — don’t be surprised if it was all just an A+ troll job by them to fuck with people. It may seem psychotic to imagine, but this whole Tom Brady free agency saga has, somehow, become a more popular topic of conversation than the coronavirus, so maybe the three former teammates were all just having fun by doing this in a very public setting for millions to freak out over.

Who knows what happens with Brady’s future, but with Mike Vrabel’s Titans among the heavily rumored teams that could land the future Hall of Famer — and the two guys clearly having such a tight friendship — it’s no wonder Pats fans more than freaked out after seeing them chum it up on FaceTime.