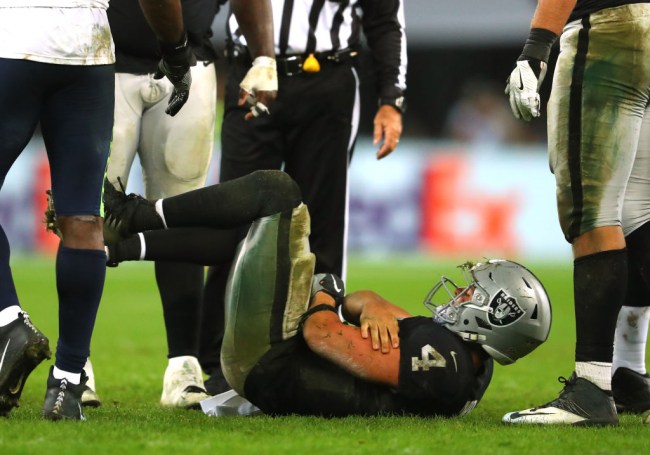 Today, a report from The Athletic’s Marcus Thompson is swirling around the internet that claims that Raiders QB Derek Carr has a “fractured relationship” with his teammates, who have reportedly lost confidence in him after he seemingly broke down in tears during a Week 6 loss against the Seahawks in London.

It certainly didn’t help when film showed what looked like him crying after being sacked and injuring his arm. They saw his face. They heard his whimper. They witnessed him explain on the sidelines. They assuredly watched it again in film session. It’s hard to see how Carr can lead this team again.

The incident has taken on a life of it’s own and is being pinned as a microcosm of the Raiders dismal 1-5 start to the season. A quarterback literally crying after getting sacked tells more of a story than stats and analytics ever could.

But, according to the alleged crier himself, there’s much ado about nothing. The 27-year-old three-time Pro Bowler broke his silence about the “crying” clip that has been shared thousands of times on the interwebs.

Carr’s older brother, Darren, initially took to Twitter to defend Derek’s manhood. Derek clarified what he actually yelled to his teammates while he was on the ground.

Don’t even waste your time with this big bro. On the ground I yelled get me up get me. Then I got to the sideline and yelled again. Not one tear. Not one time. There is the Truth. People will click on it because it sounds crazy. But stop playing with me.

You heard it straight from the horse’s mouth: confirmed not crying.

If he ain’t crying right here it’s the NEXT closest thing to crying lol. pic.twitter.com/GSIwLQRjGN