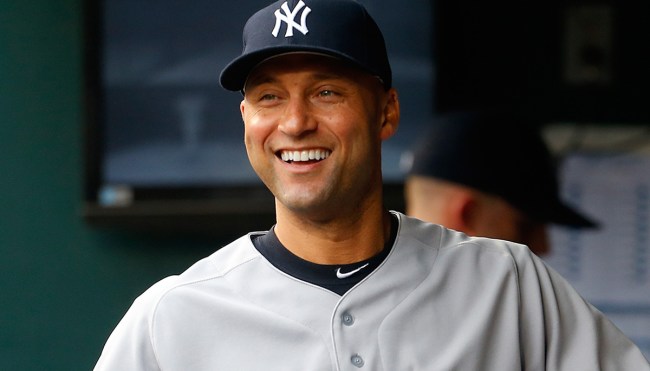 Derek Jeter was easily the most notable name on a Yankees team that was filled with stars in the late 1990s and early 2000s. He did what he could to keep a fairly low profile off of the field, but that’s much easier said than done when you’re the face of a dynasty while playing in the Big Apple.

The shortstop all but assured he’d be under the watchful eye of the New York media at all times when he started dating Mariah Carey shortly after winning his first World Series with the Bronx Bombers, which he followed up with flings with a list of women that included Jessica Biel, Minka Kelly, and Miss Universe winner Lara Dutta.

Jeter’s love life ultimately spawned one of the most entertaining rumors of all-time courtesy of The New York Post, which ran a story in 2011 asserting he handed out gift baskets filled with signed memorabilia to women he hooked up with (the story came courtesy of an unnamed source who claimed she received one on two separate occasions following one-night stands).

The Hall of Famer firmly denied that was the case when he chatted with Joe Buck in 2015 (his wife also says she never got one). According to The Daily Beast, he got the chance to address it at length in the upcoming documentary series The Captain and also included a pretty amazing anecdote about his interaction with a random fan who enthusiastically revealed he’d drawn some inspiration from the debunked claim:

“You know, you see it, and then it’s like, how the f—k did people come up with this? You know, basically, that’s it. And who would believe this shit?

I remember being at a Starbucks one time and there’s some random guy behind me and he says, ‘Hey, I just want to let you know that I’m giving out gift baskets because you did.’ And I turned around and said, ‘You’re a f—kin’ idiot!’ and the look on his face… like, did he think I was gonna say, ‘Yeah, good job, man!’