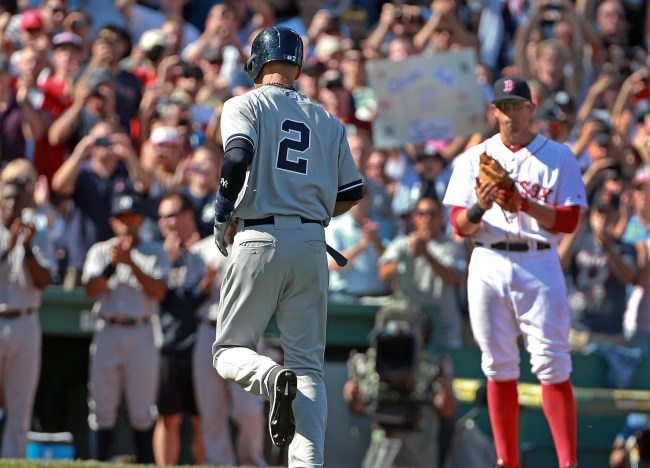 There’s a video on YouTube with baby goats dressed in sweaters. SWEATERS! ON GOATS! They’re just sauntering around, all-baby-goat-like. It may be the cutest thing I’ve ever seen.

Still, amongst thousands of likes on the video, there are 30 of Satan’s children who gave it a thumbs down. Some men just want to watch the world burn.

One of those savages had to be the same person who put the kibosh on Derek Jeter becoming the second unanimous selection in Hall of Fame history. Although Jeter polled at 100 percent on public ballots, one of the best shortstops in history was disallowed the unanimous honor after securing 396 of the 397 votes by the Baseball Writers Association of America.

Hold your applause for Mr. Contrarian.

Still, Derek Jeter’s 99.7 percent approval to be elected into Hall is 2nd-highest ever, beating out Ken Griffey Jr. from the spot, who finished with 99.3 percent.

But despite being Mr. October (all-time postseason leader in hits (200), runs (111), and total bases (302)), ranking sixth among shortstops in career WAR, sixth all-time in hits, no stat will ever be more impressive than this one:

Never forget how great Derek Jeter was on & off the field pic.twitter.com/aHV8fcb3xG

As you may imagine, the uproar over Jeter’s failed unanimous selection incensed more than just Yankee fans.

It pissed off people you really don’t want to piss off:

How is Derek Jeter not unanimous???? #BaseballHallofFame

Twitter looking for the guy who didn’t vote for Derek Jeter pic.twitter.com/iri7JSt2rW

Name of the one individual, please. https://t.co/8dvZApG5uu

Jeter was one vote shy of being unanimous… pic.twitter.com/iYxXQOCsym

It’s insane to me that every single person voted “yes” for Derek Jeter to be in the Hall of Fame except for ONE PERSON.

Their vote shouldn’t count and they should be ashamed of themselves. How do you vote that DEREK JETER shouldn’t be in the Hall of Fame?Deserved to be unanimous

Jeter would have been unanimous had he kept the Marlins home run statue.

Somewhere in a dark basement, this voter is sitting under his desk trembling like a leaf hoping O.J. doesn’t make him pay the price for his stupidity.