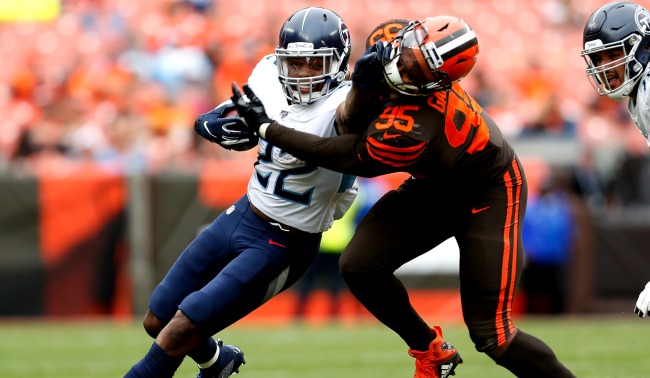 Tennessee Titans running back slash human bulldozer Derrick Henry recently shared a montage video showing off some of his offseason workout regimen and to say it is impressive would be understating it, by a lot.

The 27-year-old Henry, who set career marks in 2021 by running over NFL defenses for 2,027 yards and 17 touchdowns on the ground, is preparing for his sixth season in the NFL like he’s a desperate rookie trying his best to secure a spot on the roster.

Back in March, the 2020 Associated Press Offensive Player of the Year was filmed doing some of the most insane pushups fans had ever seen.

In May, Henry was still hard at it showing off feats of strength that most mere mortals can only dream about achieving.

Fast forward to this week, and here he is again, with a montage video showing off some his offseason workouts that would not be at all out of place in an action movie.

“It’s every day hard work,” Henry says in the video. “Putting the work in, giving our fans and the city of Nashville what they want. We didn’t like where we ended the season last year. We’re division champs, but you know, you can never be satisfied with that. We’re working towards that goal each and every day.”

Henry says he’s been hitting the gym twice a day this offseason, once in the morning and again later in the day.

“The 2021 offseason has been great,” Henry adds. “I’ve been doing two a day, every day. Having the season in mind while you’re working out, you want to be the best player you can, that’s all I want to do, just go out there and lay it all on the line. You know, you have to react quick as running back, the hole could be there, then it could close, you know you’ve got a defender coming on you fast, you’re breaking through the line, you’ve got to be able to react.”

Doesn’t seem like that will be a problem for him in 2021.

In the Gym with @KingHenry_2 👑 pic.twitter.com/whoNbGnsU2