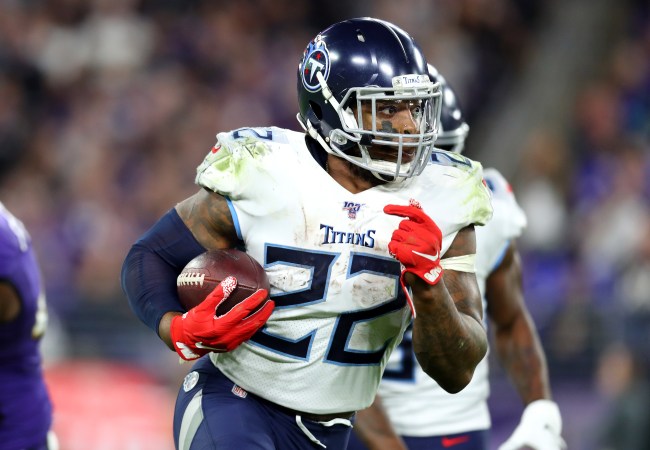 Derrick Henry is a freak, and I say that in the most complimentary way imaginable. The man is massive at 6-foot-4, 247 pounds but can hit a second gear in the open field that makes him look like a bowling ball shot out of a cannon. Also, as we’ve seen all season long but especially throughout the postseason, the man always falls forward picking up an extra yard here and there wearing down the defense in the process.

It’s no fluke that he led the NFL in rushing this season, the man has elite speed for his size and is virtually impossible to take down.

While his size-speed combo makes him who he is, he has another weapon in his arsenal and that’s his stiff arm. Last season it was A.J. Bouye that caught the stiff arm and just last week it was Earl Thomas that literally got spun around from the force of Henry’s arm tossing him aside like a doll.

While you can’t really teach his unique stiff arm, you can certainly practice it and it turns out Henry does plenty of that at practice. During Thursday’s practice, Henry was caught doing a drill simply stiff-arming a helmet on the end of the stick and let’s just say the helmet lost, badly.

Derrick Henry just broke the helmet off the stick when he was doing this stuff arm, ball protection drill. #titans pic.twitter.com/MsJFMRpTq2

It’s unavoidable that a Chiefs defender is going to catch that stiff arm on Sunday in the AFC title game, but we may need to be a bit concerned for their well being after seeing Henry show off his strength.