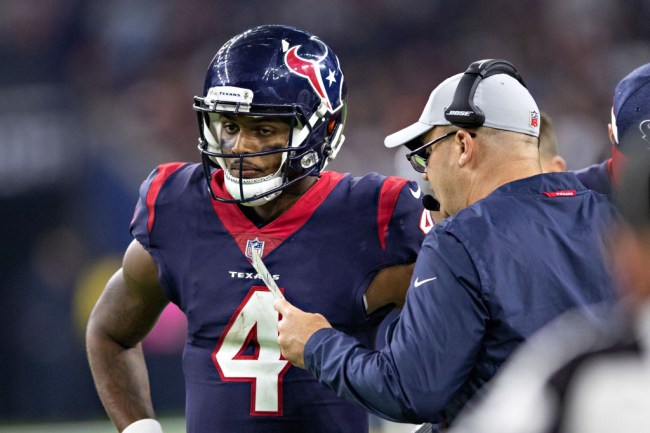 Things looked really good for Bill O’Brien and the Texans on Sunday afternoon against the Chiefs. Houston jumped out to a quick 24-0 lead, but then things turned bad, real bad. Kansas City flipped a switch and managed to score 41 unanswered points, including 28 in the second quarter alone, before punching a ticket to the AFC Championship game with a 51-31 win.

On one hand, O’Brien has coached the Texans to the AFC Divisional round two of the last four seasons, but on the other hand, the man made two extremely questionable decisions that flipped all momentum the Chiefs’ way on Sunday. With that, plenty of speculation has come about whether or not he’s the right man to lead this Texans team.

The first bad move came on a fourth and one on Kansas City’s 13-yard line. Sure, taking the field goal going up 24-0 extended Houston’s lead to a three-score game, but going for it and scoring a touchdown could have completely changed the outcome of the game. The worst move from O’Brien however came on the Texans’ next possession when they elected to attempt a fake punt on their own 31-yard line which was stopped and completely flipped the script of the entire contest.

Deshaun Watson was asked about Bill O’Brien, his decisions and whether or not he stood by him following the tough loss on Sunday. Now, of course, Watson isn’t going to stand up there and tell the media he thinks he should be fired, but he gave a strong vote of confidence for O’Brien remaining the man in charge in Houston.

“I mean, you might have doubt, but there’s no doubt. I mean, I love that man. I’m going to play hard for that man. Y’all can say whatever you want to say through all the media and all the writing, but as long as I’m at quarterback, he’s cool with me,” he told ESPN.

“He’s got my heart. He’s going to get all of my 110% every time I step on that field. So y’all can say whatever, but [I’ll] always be rooting for that man and going to play hard for him.”

O’Brien has led the Texans to the postseason in four of his six seasons in charge, but has never made it as far as the AFC Championship game. In each of those four postseason berths, the Texans have won the AFC South as well.