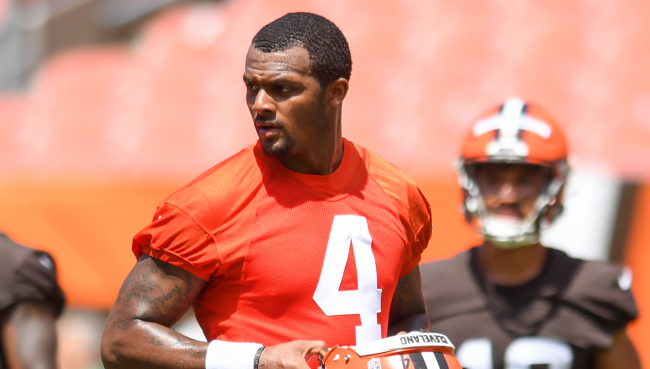 A new report by CBS Sports’ Josina Anderson on Thursday regarding Deshaun Watson and the NFL has got many fans very, very upset.

According to Anderson, the NFL, the NFLPA and Deshaun Watson’s advisors are in the midst of trying negotiate a discipline settlement.

What’s that? You didn’t know that players could negotiate their own punishments? Neither did a whole lot of other people.

Anderson also reported on Thursday that “talks involving a potential number of games missed ‘fell apart’ not being on the same page. As of now, process moves forward, per league sources.”

Earlier this week it was reported that Watson had settled 20 of the 24 lawsuits that were pending against him – something the NFL claimed would have “no impact” on his punishment.

The NFL, while repeatedly refusing to give any sort of timeline for when Deshaun Watson will be punished, reportedly would like to give the new Browns quarterback a “lengthy” suspension.

Another report stated that the NFL, and more importantly, the Cleveland Browns, would like to have Watson’s punishment determined before training camp. Browns training camp opens on July 27.

Apparently, thanks to the new collective bargaining agreement, Dan Graziano of ESPN reports, “any recommendation the NFL makes about discipline for Watson — be it a fine, a suspension or both — would then go before retired U.S. District Judge Sue L. Robinson, who serves as a jointly appointed (by the NFL and the NFLPA) discipline officer.”

However, even if the NFL imposes a punishment on Watson and Robinson agrees with it, Deshaun Watson can then still appeal. In that case, the appeal would then be heard by… wait for it… NFL commissioner Roger Goodell, who would have the authority to make a final decision.

Oh, what a tangled web we weave…

Needless to say, news that Deshaun Watson is in the process of negotiating a discipline settlement did not go over well with many NFL fans.

WTH?!?! You can negotiate your own discipline now???? Crazy!

Calvin Ridley was suspended for a yr for sports gambling while he was already away from the team and no contact with the league. Watson should be suspended for a yr at least and that's being generous. His situation is really disturbing tbh

Wait the NFL still hasn’t suspended Watson for the season? Didn’t Brady get 4 games for lack of air in a football? https://t.co/WOYky6XCf5

How can someone with that many allegations feel the need to have any kinda leverage ? He should simply take whatever the NFL throws at him (most likely A year suspension) and keep his mouth shut

Watson when he hears the word “settlement” pic.twitter.com/dAirBw2NSv