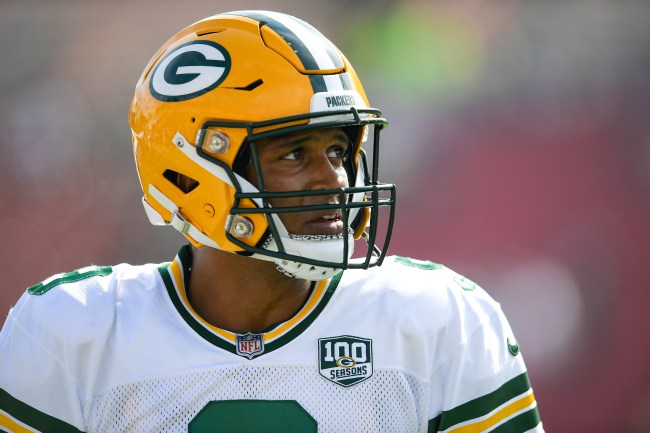 DeShone Kizer sure as hell doesn’t lack confidence; which, you know, is an important attribute to have if you’re going to reach the NFL and start a few games at quarterback. Problem is, when the former Notre Dame signal-caller was entering the league in 2017, he may have had too much confidence — and those words sure look stupid AF now.

Not to rip DeShone Kizer — because I’m not the type of person to kick a man when he’s down — but after the former third-round pick got released again this weekend by the Green Bay Packers, and then picked up on waivers by the Oakland Raiders, it’s hard to imagine him developing into a star. Sure, he’s still only 23 years old, but, damn, he’s had some pretty crappy performances when given a chance to prove he has what it takes to be a starting quarterback.

Whether it was his time with the Cleveland Browns — who, unfairly, started him under center for 15 games during their 0-16 season in 2017 — to his 47.6 completion percentage in limited action with the Packers, Kizer hasn’t exactly balled out quite yet. But, had you asked him about what he could do in the NFL prior to the 2017 NFL Draft, well, good ol’ DeShone wasn’t shy in holding back his thoughts.

For whatever reason, an old interview that DeShone Kizer did with USA Today recently popped up on Reddit, with a user specifically highlighting Kizer’s take on none other than Patrick Mahomes. Naturally, Kizer thought he was the best quarterback prospect entering the league that year — and, oh man, did it age poorly. Take a look below at what Kizer said while comparing himself to the 2018 NFL MVP.

Kizer’s confidence didn’t stop there, though, because, in the USA Today piece, it was mentioned that DeShone truly felt like he should’ve been considered for the No. 1 overall pick that year, and even compared himself to (gulp) Tom Brady and Cam Newton.

“No one else can do what I can do. And I’ve truly figured out in this (draft) process, if I can maximize all my potential in every aspect of the game – this is bold – I do have the ability to be the greatest quarterback to ever play. Imagine taking (Tom) Brady’s intellect and Brady’s preparation and putting it on a guy with Cam Newton’s body. Why can’t I be the greatest? The only thing stopping me from it is me. That’s what’s driving me now.”

Again, I don’t want to stomp on a man when he’s down, but, damn, what in the hell was DeShone Kizer smoking prior to the NFL Draft in 2017? It’s one thing to play the pre-draft game and show some swag — especially when compared to other guys like Patrick Mahomes in your class — but it’s borderline crazy to drop Cam or Brady’s name in the way that he did.

This, right here, is why it’s best to avoid interviews — so take a few notes on what not to say or do, future NFL prospects.