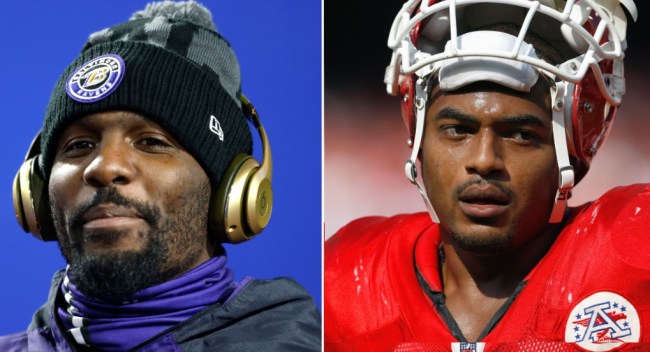 Johnson, who had a long career playing in the NFL for the Kansas City Chiefs, has transitioned into becoming a bizarre social media conspiracy theorist where he’s accused NFL players like Tom Brady of being a part of the occult and claimed The Weeknd performed a satanic ritual during the Super Bowl halftime show.

Over the weekend, Johnson took aim at Bryant over a chain pendant he once wore that apparently featured a symbol that was used by occultist Aleister Crowley.

Bruh who gets a diamond encrusted chain of the Law of Thelma (Do what Thou Wilt) on it, created by the most revered Pedophile Satanist in all esoteric b.s religions?

Now I know why the leagues most fragile player keeps getting chances. pic.twitter.com/WTMa4a4MMA

Bryant saw Johnson’s tweet and immediately shut him down.

😂 you can’t be serious….. I won the chain from a tournament.. I’m down with you until you start talking dumb shit like this.. I’ve dealt with a ton of shit but I won’t be getting my point across like this .. you reap what you sow bro handle that 🙏🏿 https://t.co/JfOn2EnWSo

Johnson went on to take cheap shots at Bryant about his Achilles injury and continued to accuse him of being in a cult because of the pendant.

Funny, I never was down with you. 😴 Put your phone down, I don’t want you to tear an Achilles. https://t.co/WUn1rAOvRH

I was literally just supporting you the other day..but check this I grew up watching you and always been a fan.. it does me no good to go back and forth with you.. you trying to put me down to make yourself feel good .. God bless you .. you are not the enemy https://t.co/fhGjRUTJ6t

I don’t care, I said what I said and it shall stand to do the work The Most High Yah has intended it to do. Selah https://t.co/UzzpJegkMG

Funny how “dumb shit” is found in all 3 sigils of Satan. pic.twitter.com/cI0sqtGPMN