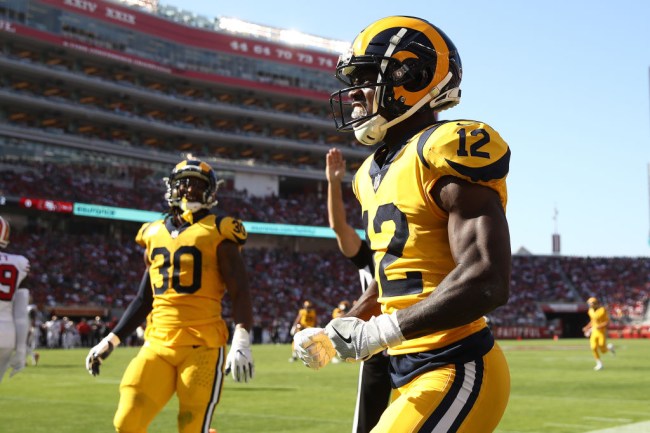 Welcome to Week 8 of the NFL season. Hard to believe after this week we will be at the halfway point of the season. It’s flying by. We’re going to experiment this week with more of a free flowing write up at each position to cover a few more players at each position. Leave us a comment or contact me on Twitter @kevdudz and let me know if you like this format better or the format we have used in the past weeks.

Quarterback is extremely deep this week, there are a ton of viable plays. Patrick Mahomes is by far the most expensive quarterback, but he should be. Earlier this season, Mahomes threw for 304 yards and a TD, and ran for one as well, on the road against the Broncos.  Now he gets them at home in KC, one of the toughest places to play. Mahomes has a great floor.

However, we can save money at the position, with a lot of other QB’s at lower price points. Jared Goff’s Rams have a team total implied of 33 points in what should be a shootout against Green Bay. At 1k less than Mahomes at $6,000 Goff has just as high of an upside as Mahomes. Other QB’s that are jumping out at me include Andrew Luck at $6300 as he is churning out 20+ point days on the regular, and faces a terrible Raiders defense. Andy Dalton should be lower owned than he deserves to be, after putting up a stinker on Sunday night. He’s facing the worst passing defense in the league in Tampa Bay, at $6200. On the really cheap side, Derek Carr at $5200 should have some solid opportunity to put up numbers in a game with a high over under, and Oakland should be trailing, so forced to throw the ball.

Running back looks to be the spot we may look to for value this week, other than the best player in Fantasy Football, Todd Gurley. Gurley is $9800, a steep price to pay, but like Goff, has a massive ceiling based on the projected points the Rams should put on the Packers. On the cheap side, Bilal Powell has been put on IR, so Isiah Crowell should see a large workload for the Jets. The matchup vs the Bears isn’t too enticing, but they are not as good as their perception. At only $3700, that price is too good to pass up. Raheem Moshert has looked good the past 2 weeks, taking carries away from Alfred Morris for San Francisco. With Matt Breida up in the air to play this week, I like Moshert a lot against a porous Arizona defense at $3800, should Breida be unable to suit up. In the mid tiers, with a new Offensive Coordinator in Byron Leftwich, who has pledged to do new things with David Johnson, I’m looking at taking a few shots on using DJ at $6700 vs the 49ers.  He scored 2 TD’s against them just a few weeks ago, and I think he has the opportunity to do so again, but with more yardage this time around at home. James Conner is in a smash spot as well at $7500 at home against the Browns. If you can find the money to use him and Gurley, that gives you a heck of a floor.

As is the standard in this article, Robert Woods and Brandin Cooks are in fantastic spots here against Green Bay, for all the reasons listed above for Gurley and Goff.  I’d target Woods in cash games, and Cooks in tournaments, due to his game breaking upside. On the higher end of salaries, I love AJ Green and Odell Beckham this week. Green should see a massive target share this week against the atrocious pass defense of the Bucs. He has slate breaking upside this week. Beckham is slightly cheaper, and as well, has the potential to be the highest scoring player on any given Sunday. Moving down into the lower teirs, Michael Crabtree last saw less than 8 targets in week 1. Joe Flacco’s been peppering him with 9,9, and 12 targets the last 3 weeks. He’s got a nice floor for cash games this week at only $4800. To be honest, there isn’t a lot of safety on the lower levels of WR this week. Jordy Nelson should be in play, due to Amari Cooper being shipped out to Dallas, but it certainly makes me a little nervous putting him into a cash game lineup, despite the solid price of $4700. This is why I’m liking targeting the cheap value guys at running back this week.

Tight end has been a crap shoot week after week. I’ve found myself relying on Eric Ebron who for the most part, has been very good with Jack Doyle out of the lineup. But Doyle could be potentially returning this week, and with TY Hilton returning last week, and an elevated price tag, it’s hard to play him. I like CJ Uzomah on the Bengals at $3500, and David Njoku is always in play for me, as he has been a target hog since Baker Mayfield has taken over. Jimmy Graham has some of the highest upside in the league for a tight end, but is inconsistent, and Jared Cook should still command plenty of targets but is expensive at $5,000.  If you want to just punt the position, Jeff Heuerman is a cheap option, but by no means is safe, he just received 0 targets last week.

The Bears are the most expensive defense this week, but are facing a rookie QB in Sam Darnold at home, with the Jets ravaged by injuries. They are extremely expensive, but if you can find a way, they should be in a position to have some major upside in this matchup. I prefer typically to pay down at defense, so I’ll be concentrating on the Steelers, at home, vs a Browns team who is giving up a lot of sacks. Off the radar, I’ll probably take a few shots at KC’s defense at home vs the Broncos.

Good luck this week, and follow me on twitter @kevdudz and let me know what you think of the new format.  Last Sunday, I tweeted out some plays as more news broke about injuries and availability, and I will attempt to do that again this week.  So give me a follow, and I’ll be able to give you a few more plays on Sunday.