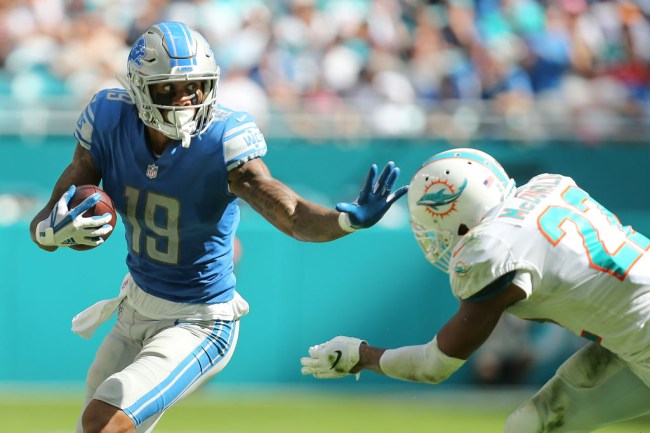 Welcome to Week 9, as we have passed the halfway point already. This week is looking to be a scoring bonanza, with a lot of great plays in what should be some massive scoring environments. There’s some great value on the slate, and some fantastic options on the high end to pay for, so let’s break down each position and see how we are attacking things this week.

As you can tell from past articles, I am usually an advocate for paying down at the quarterback position. However, this week it looks like it may be optimal for us to be paying for a quarterback on the higher side of the salary range. The game environments are just too strong for some of these plays. We can start at the top as we usually do with Patrick Mahomes at $7100. With a strong team implied total of 29.5, and three consecutive games of scoring at least 30 DraftKings points, Mahomes is about as safe as they come. With a great matchup against a struggling Browns defense, Mahomes should light it up again this week. If you are looking for a discount, travel a thousand dollars down to the most attractive game of the slate. Drew Brees at $6100 and Jared Goff at $6000 are both extremely strong plays. This game has one of the highest over unders in NFL history, currently sitting at 59.5. With a one point spread, this game should be an epic back and forth shootout, so both quarterbacks have the ability to put up crooked numbers in this matchup. Both offer the floor we look for in cash games, and the upside needed to vault us to the top of the leaderboard in tournaments. The other quarterback I’ll be focusing in on is Cam Newton at $6600, for the same reason we always target a certain QB each week. He’s playing the Bucs, who’s pass defense is just flat out terrible.

We start where we usually do at running back, with the GOAT Todd Gurley.  Gurley is on pace to have the greatest fantasy season of all time, passing Ladanian Tomlinson. In a shootout versus the Saints, Gurley’s the top play on the board at running back, easily. Both Alvin Kamara at $7300 and Mark Ingram at $5000 are both in play from this game as well, as the amount of scoring opportunities should be massive here. If Dalvin Cook is again ruled out, Latavius Murray should again see a heavy workload for the Vikings, and at $5100 should provide some nice value on his salary. Other running backs I’ll be targeting this week include Christian McCaffrey at $7800, Phillip Linsay at $5500 provided Royce Freeman misses the game again, and I’ll have some exposure to Nick Chubb again at $4500. Lastly, Melvin Gordon has been limited again in practice, so Austin Ekeler could also provide us some major savings at only $4300 if Gordon gets ruled out.

Like two weeks ago when the slate started with putting Nick Chubb in your lineups, we get the proverbial “free square” this week at wide receiver. With Demariyus Thomas being shipped out of Denver over to Houston, the number 2 wide receiver spot now solely belongs to Courtland Sutton. Sutton’s price is only $3900 so he provides us some great salary cap flexibility and his target numbers should increase to about 8-9, and he gets a great matchup against the Texans. Other cheap wide receivers you can target this week include DJ Moore of Carolina at $4300 and Tre’Quan Smith at $4200 of the Saints, in our favorite game of the week. Tyreek Hill has been limited in practice this week, so if he is ruled out somehow, Sammy Watkins at $4900 and Chris Conley at $3200 are both in play as well.  Another impact from the trade deadline that we will see is now a more condensed target share to the Lion’s wide receivers. Kenny Golladay at $5500 and Marvin Jones at $5300 both provide high upside now, as they should be receiving the lion’s share (pun completely intended) of the targets going forward. On the high end, it’s hard not to be all over Michael Thomas at $7600, as well as Jarvis Landry at $6500 who has not been good recently, but could be a low owned break out star this week.

As usual, tight end is a tough spot to pick. I’m always interested in David Njoku, even after getting shut out last week. I expect a nice bounce back game against the Chiefs, and ownership to be down because he burned so many people last week. Ben Watson at only $3200 has the upside we look for at a cheap price, but not a safe floor, and Kyle Rudolph could as well find himself in the end zone at only $3600.

The Bears are in a phenomenal spot against Nathan Petermann and the Bills this week. But they are extremely high priced at $4100. If you can find a way to fit them in your lineup, they should smash, but ultimately, I like to pay down as far as I can. Some other defenses I’ll be targeting are the Chiefs at $2700 against the Browns, Denver at $2300 against the putrid Texans offensive line, Miami at $2800 against the turnover prone Sam Darnold and the Jets.

Good luck this week, and hit me on twitter with any questions @kevdudz