Nate Diaz Wants Conor McGregor And Joe Rogan To Apologize For Calling Out Stephen A. Smith For Knowing Nothing About MMA 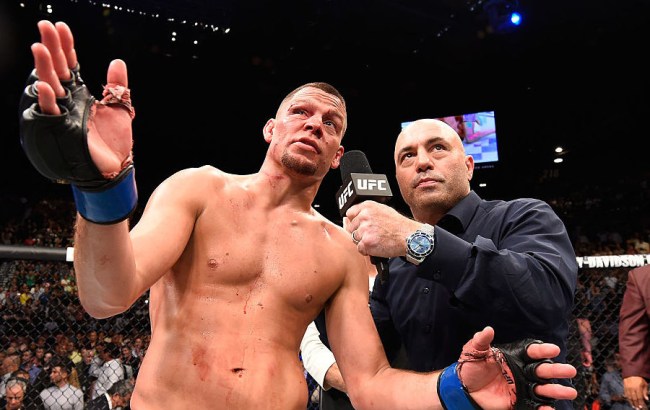 Last year, we learned ESPN was gearing up to give Stephen A. Smith tens of millions of dollars to spout off takes of varying warmth and coldness to the masses, which is a pretty impressive payday for someone who has consistently shown he has no idea what the hell he’s talking about.

I’m not trying to suggest the talking head is absolutely clueless when it comes to discussing sports, as he wouldn’t have been able to make it where he is today without being somewhat knowledgeable. However, as Socrates once noted, a truly wise man is one who admits he knows nothing so it’s safe to say Smith is anything but that.

Smith got his start covering the NBA for The Philadelphia Inquirer and he can certainly hold his own in that realm. However, the same can’t be said for other leagues—especially the NFL, as he’s repeatedly shown he’s absolutely clueless when it comes to the intricacies of football.

A couple of weeks ago, the personality decided to branch out a bit and joined Joe Rogan and Michael Eaves following Conor McGregor’s swift knockout of Donald Cerrone at UFC 246, where he ripped into Cowboy for supposedly giving up.

This armchair analysis didn’t sit very well with Rogan, who proceeded to call out Smith on his podcast last week, with the actual MMA expert saying McGregor was simply the better fighter.

Smith took the criticism to heart and immediately admitted his comments were misgui—oh, wait. Just kidding. He doubled down on what he said in a rant that eventually came to the attention of the Irishman, who said he owed Cerrone an apology for his objectively bad take.

The call you discuss here is A+. I didn’t show enough. I’m not paid by the hour though. Joe’s comments however, come from you saying the opposition fighter quit. Broken nose/orbital bone say different. Fighting is vicious. Those who make the walk deserve full respect!
Apologise.

On Wednesday, Nate Diaz decided to enter the fray and suggested Smith is actually the person who deserves an apology and that he was spot on in saying Cerrone never even stood a chance.

It’s worth noting that Diaz’s interpretation of Smith’s comments is a bit suspect, as McGregor was the clear favorite heading into the bout and people weren’t shocked by the win but instead surprised he managed to dispatch Cowboy with the ease that he did.

Why can’t we all just get along?