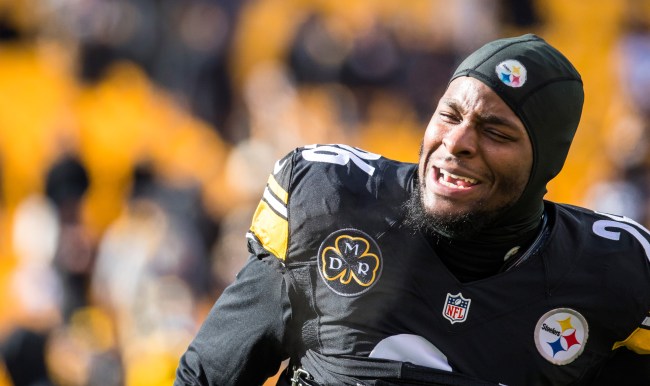 At this point I honestly don’t know why Stephen A. Smith continues to give his opinions on anything releted to the sport of football. He’s seriously got me wondering if (a) he’s just gone full Skip Bayless and will say anything, even if it’s obviously dead wrong, to get attention, or (b) there is something actually wrong with his brain.

From saying Ohio State QB Dwayne Haskins is “more of a runner than a thrower” to suggesting Kareem Hunt was going to play – after he was suspended – to inexplicably forgetting about Drew Brees to completely butchering an analysis of an upcoming Chargers vs. Chiefs game, Smith is the mayor of Struggletown when it comes to pigskin.

And yet, here he was again on Thursday, giving the world some more of his A+ football analysis when the discussion on First Take turned to which team should sign running back Le’Veon Bell.

“How about the Philadelphia Eagles? Or the Carolina Panthers?” Smith asked co-host Max Kellerman and guest Victor Cruz.

“Umm, well, I think Carolina’s got a guy in Christian McCaffrey who’s completely underrated because…” Kellerman responded before being interrupted by Smith, who justified his statement by saying, “But they don’t have any receivers. Him and Le’Veon Bell is what I am [inaudible].”

And poor Victor Cruz… like a deer caught in some headlights.

Naturally, because it’s what folks on Twitter do, people shared their thoughts.

ESPN is doing a diservice to Stephen A by making him talk about football, he has no idea what's going on, he's like more people when they talk about politics.

It's got to be on purpose. He gets talked about every time this happens. He'll do anything to have people talking about him.

Time for some tests. Early onset...

Okay, good, I am not alone in my two lines of thinking.