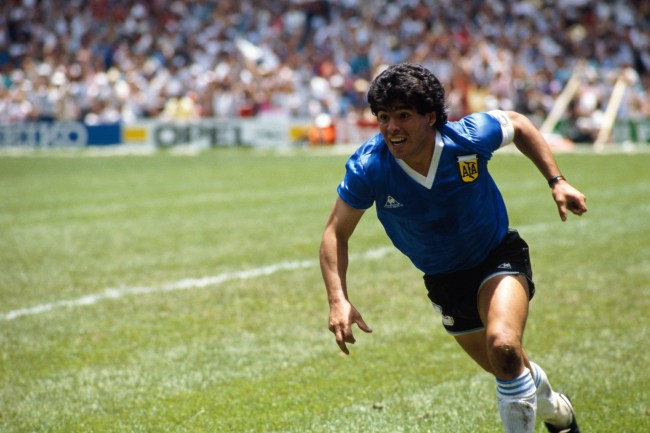 Diego Maradona’s game-worn jersey from his famous “Hand of God” goal at the 1986 World Cup is going up for auction.

While this jersey definitely deserves to be in a museum, a private buyer (with lots of money) will be able to purchase this historic jersey at an online Sotheby’s auction starting April 20th and ending on May 4th.

What’s cool is the jersey will be on display at Sotheby’s New Bond Street gallery in London. The expected sale price of the jersey is estimated to reach over $5 million.

Soccer fans know the legend that was Diego Maradona, but in case you’re unfamiliar he is one of the greatest players of all-time and often debated as being the greatest between himself, Messi, and Ronaldo.

Maradona is also known for winning big matches. The game-worn jersey comes from one of Maradona’s greatest games when he and Argentina defeated England 2-1 in the 1986 World Cup.

Maradona’s first goal of that game came off a famous score called the “Hand of God” goal, as the ball famously touched Maradona’s hand on the score.

The Jersey Diego maradona wore during the 1986 World Cup quarterfinal against England will be auction.

The match in which he scored the 'Hand of God'

The shirt estimated to sell for more than $5M at auction.

England fans will never forget this goal in a hurry.🤦🏽 pic.twitter.com/zLDc1XB4H4

His next goal to put Argentina ahead is often referred to as the “Goal of the Century,” as Maradona blasted his way from midfield all the way to the goal to score.

Argentina would go on to win the World Cup that year, beating West Germany in the final.

How the Game-Worn Jersey Found its Way to Auction

Hodge has had the jersey ever since that day. Over the years he has loaned the jersey to some museums, but as far as ownership goes it will be the first time the jersey will change hands.

It's been an honour and a privilege to look after *that* Diego Maradona shirt for over 18 years.

Interested to see who snaps it up next. There's always room in our squad for another loan signing… 😉 https://t.co/94ANl1tQMT pic.twitter.com/qv1rtrKGNc

Hodge also announced the auction, having this to say,

Hodge: “I have been the proud owner of this item for over 35 years since Diego and I swapped shirts in the tunnel after the famed match. It was an absolute privilege to have played against one of the greatest and most magnificent football players of all time. It has also been a pleasure to share it with the public over the last 20 years at the National Football Museum, where it has been on display.”

Diego Maradona: Argentina legend's 'Hand of God' shirt to be sold at auction – https://t.co/cUyeJGvAdM{
England's Steve Hodge (left) has had the shirt since swapping it with Diego Maradona at the 1986 World CupThe Argentina shirt worn by Diego Maradona when he scored his infa… pic.twitter.com/c5bwasiaHi

Hodge: “The Hand of God shirt has deep cultural meaning to the football world, the people of Argentina, and the people of England and I’m certain that the new owner will have immense pride in owning the world’s most iconic football shirt.”

This Maradona jersey is like the holy grail of soccer memorabilia. To compare it to major American sports, it would be on the same level as Wilt Chamberlain’s game-worn jersey from his 100 point game.

And perhaps Maradona’s jersey could be argued for being more significant than a jersey example like Wilt’s.