Brian Windhorst Issues Warning To Jazz Fans: Donovan Mitchell May Be Unhappy And Dwyane Wade May Be Concerned 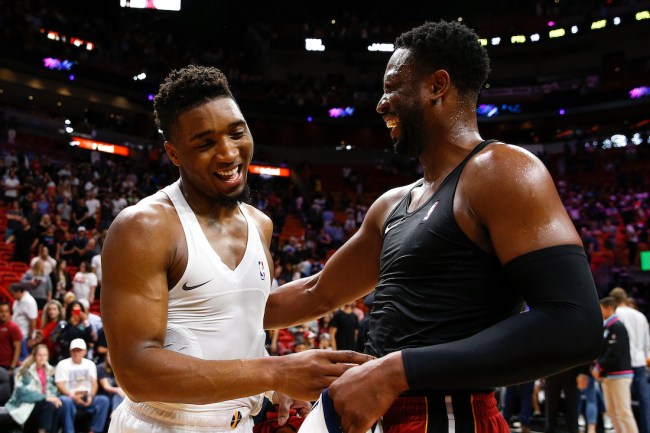 Since being drafted by the Utah Jazz in 2017, Donovan Mitchell has emerged as an absolute superstar in the NBA, with the guard proving to be dynamic offensively. Those type of skills helped the Jazz snag the No. 1 overall seed in the Western Conference in this year’s NBA Playoffs, with the team winning 52 games — which was tops in the entire league.

Unfortunately, despite a stellar regular season, Utah was ousted in the second round of the postseason by the L.A. Clippers, who overcame a 2-0 deficit to win four-straight on its way to the Western Conference Finals. Naturally, Mitchell and his teammates had to feel like the success this year was wasted.

But are there bigger issues at hand following the collapse in the NBA Playoffs against the Clippers? Could Donovan Mitchell now be upset with the organization and begin questioning whether or not he wants to be with the Jazz long-term? According to ESPN’s Brian Windhorst, yes, and it might be on the mind of new part-owner Dwyane Wade.

Wade, who became a minority owner of the Utah Jazz this past April, has a relationship with Mitchell. That’s natural, given both are/were superstars. Those types always seem to mesh together and run in the same circles. They also seem to think alike — and are impatient, often wanting success immediately.

Per Windhorst, that type of thinking may be creeping into Mitchell’s head, and, ultimately, may have Wade concerned that the guard either wants changes or wants out. Here’s what the ESPN reporter said during Tuesday’s edition of the Hoop Collective podcast. (starts at the 47:50 mark of the podcast):

“I do think that Dwyane Wade, who [owner Ryan Smith] brought in to be a co-owner but also be an advisor, I think Dwyane Wade is seriously concerned about Donovan Mitchell’s desire to stay there long-term… Dwyane Wade is going to influence changes, and he’s going to influence changes because the way Donovan Mitchell saw this season unfold, specifically how his ankle injury was handled in the playoffs, really unnerved him and he was in a bit of a rough spot with the franchise near the end of the year.”

On the surface, Windhorst’s claim is shocking. I mean, if you’re a fan of the Utah Jazz, this isn’t really what you want to be hearing at all as the NBA offseason approaches. But there are some things to note.

First, Donovan Mitchell re-upped with the Jazz via a max contract extension just last November, with the first year of the deal starting next season. Windhorst mentions this a few times in the podcast.

Second, the star guard hasn’t publicly come out and said he’s unhappy, nor has he given hints by passive aggressively put anything into social media world — as often happens these days.

Third, while Brian Windhorst is respected, let’s not discount the attempt at sensationalism here. Is this news about Mitchell an opinion, or is it a report from a source? And is Dwyane Wade really wondering if the Jazz guard wants out, or is it just something that could be in his head? We don’t really know, but it seems like the former.

This all feels like it may stem from one incident during the NBA Playoffs between Donovan Mitchell and the Utah Jazz in which the guard sat out Game 1 of the opening round against the Grizzlies. Memphis won the game, and there seemed to be some dysfunction between Mitchell and the team’s decision to sit him.

Other than that, there haven’t really been many indications that Mitchell’s upset with the Jazz, other than being bounced prematurely in the NBA Playoffs. Sure, that could all change — and the media’s going to spin things how they want to when a star doesn’t win a championship — but this seems premature at the moment.

With Dwyane Wade now a part-owner of the Jazz, he may have some restless nights about the future of his star. But the former NBA great has influence, and if it ever gets to a point where he needs to speak with Mitchell about the direction of the franchise, he can have that candid conversation.

That said, the Jazz have about two years to seriously compete for championships before Donovan Mitchell becomes a problem. If at that point the team continues to be upset in the NBA Playoffs or, worse, regresses, Wade and his fellow owners should really be worried.