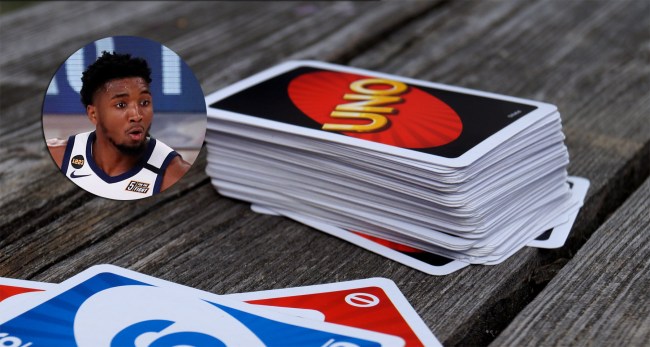 Here we go again. This time we can thank Donovan Mitchell of the Utah Jazz for sparking yet another controversial and heated rules debate among people on the internet over the popular card game of UNO. And he did it with just one simple tweet.

Mitchell, much like many others, is spending some time with his family this week and doing what many families do when they get together and played a few games of UNO.

Also as many (all) families do when they get together, especially when playing a game, a dispute arose about the rules that should be in effect.

“Do you have to say uno out when you play your last card in @realUNOgame ??? Heated debate rn wit the fam,” Mitchell tweeted his followers looking for some clarification.

He even added a poll as an added measure of rules confirmation.

Do you have to say uno out when you play your last card in @realUNOgame ??? Heated debate rn wit the fam 😂😂

I have literally never heard of that rule being used in the game of UNO in my entire life. Yes, when you’re down to one card you do have to say “UNO,” but “UNO out” is a new one in my household. Which is why I sit here stunned today that 61.9% of 56,966 people say that it is, somehow, a rule.

Of course, the official UNO Twitter account, as they always do, had to weigh in and stir the pot even further.

While calling "UNO Out" when you play your last card is a popular House Rule, it's not required.

Soooo, it’s not an official rule? I feel better now. Others, however…? Not all of them agreed. (Just the smart ones.)

You say “UNO” when you play your second to last card so you have one card left. If you are able to play your final card nothing needs to be said. “UNO” was already said before. This is the first time I’ve ever heard of saying “UNO out” on last card. Doesn’t even make sense.

No, we read it correctly. 62% of the people agree with saying “Uno Out” on the last card played. You still have to say “Uno” when down to 1 card. You are OUT of cards,when you place the last card, thus “Uno Out”. Quite Simple.

Must say "Uno" as soon as you're down to 1 card and then "Uno Out" when you play that final card. Playing any other way is uncivilized.

I know it’s your game and all but this is the incorrect answer 😂😂😂 @realUNOgame https://t.co/OktasS5t50

You can't do that, no. If you play with a popular house rule (not an official rule) of stacking, you can immediately stack two of the SAME card (same color AND number) onto each other, even jumping on when somebody else plays it, but you can't just on your turn do what you said.