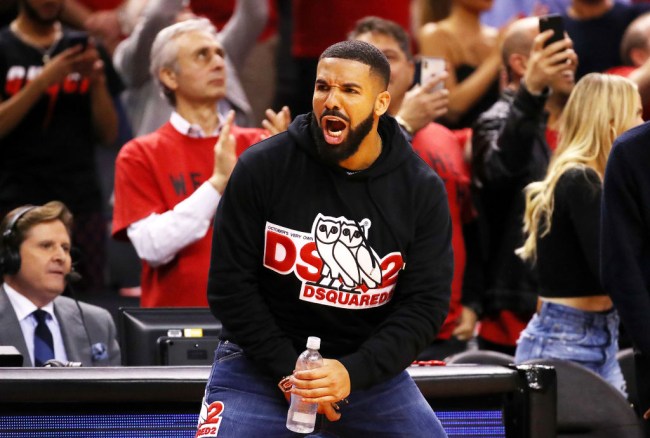 The Toronto Maple Leafs may have fallen victim to the Drake Curse during their latest in a long line of fruitless playoff runs, but as of right now, the Raptors seem to be faring pretty well despite having a notorious jinx front and center on the sidelines as they vie for the chance to lose to the Warriors in the NBA Finals.

Drake has been a staple at Scotiabank Arena for years but has attracted more attention than usual during the ongoing Eastern Conference Finals thanks to his unbridled fandom.

During the third game of the series, the Toronto native attempted to get under the skin of Giannis Antetokounmpo on multiple occasions and took great pleasure in bidding him adieu after the Greek Freak fouled out.

Drake waves goodbye to Giannis after he fouls out and the Raptors take game 3. 🤣🤣 pic.twitter.com/drmteWvvdg

However, he really topped himself during Game Four when he decided Raptors coach Nick Nurse needed some stress relief in the form of an unsolicited shoulder rub.

On Wednesday, multiple affiliates of the Bucks organization voiced their displeasure with Drake’s behavior—including one of Antetokounmpo’s reps, who ripped into the rapper in a now-deleted tweet.

“There’s certainly no place for fans and, you know, whatever it is exactly that Drake is for the Toronto Raptors. You know, to be on the court, there’s boundaries and lines for a reason, and like I said, the league is usually pretty good at being on top of stuff like that.”

Drake has done a phenomenal job as far as rustling jimmies is concerned, and shortly after the criticisms started to circulate, he issued a response in the form of an Instagram post featuring a few appropriate emojis—including the obligatory salt shaker.

The Raptors and Bucks will face off in Milwaukee tonight but the series will be headed back to Toronto for one more game regardless of the outcome and I for one can’t wait to see what Drake has in store.