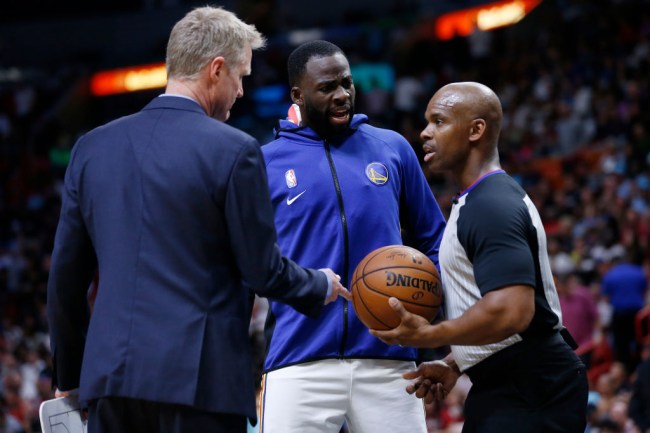 Delay of game has been a popular subject around the NBA as of late. It’s mostly revolved around untucked jerseys and Chris Paul snitching on players essentially eliminating the untucked look from the league, but now Draymond Green has stepped into the situation a bit.

Green attempted to check-in during the fourth quarter of the Blazers – Warriors game on Wednesday night and apparently took his time doing so.

According to For The Win, Green went to the scorer’s table to check-in with his warmups on along with heating pads on his knees. After 13 seconds, Portland’s assistant coach started shouting at the referees ‘how much time does he get?’

It’s a totally normal response from the Blazers bench and the officials decided to not allow Green to check-in at that moment in time making him wait until the next whistle which didn’t happen for nearly another minute.

Portland beat the Warriors 122-112 and after the game Green discussed the delay of game situation. He dropped a couple of great quotes accusing the Blazers of ‘cheating the game’ and even said ‘you don’t win in the playoffs by asking for delay of game calls.’

Green may be right about the whole not winning playoff games thing, but he and his Warriors aren’t going to have to worry about that seeing as how they’re 5-24 on the year.

While there is absolutely no denying that the new, strict delay of game scenarios popping up around the league are annoying, especially when they affect the outcome of games late, but Green taking nearly 15 seconds to check-in late in the fourth quarter sounds like more of a personal problem to me.

Green has every right to be disappointed with the officials and the Blazers bench, but it’s an entirely avoidable situation. He could have been a little more prepared to check-in and had the heating pads off of his knees before strolling to the scorer’s table and taking his time.