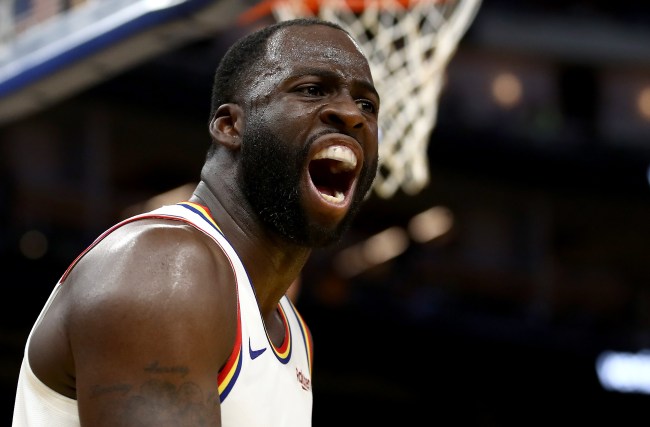 Draymond Green is in a pack of only yellow Starbursts and is realizing the hard truth that being one of the best two-way complimentary players in the league isn’t enough to eclipse 10 wins through 36 games.

The Timberwolves, the NBA equivalent of unbuttered popcorn, reminded Draymond of this yet again Thursday with a sound beatdown on the colonoscopy that is the now last place Warriors.

Dray’s most memorable highlight from the least-anticipated game of the year came in the third quarter with the Warriors down 21 when he ruined a heckling fan’s night.

”You paid $500 for these weak ass courtside seats for this, shut up” 🤣🤣🤣 pic.twitter.com/wGBodKvfC5

“You paid $500 for these weak ass court seats for this? Shut the fuck up.”

Is You Paid To Watch Me Suck the most bulletproof insult in English lexicon? “Hey I may be taking a watery shit, but you paid to watch you weirdo.”

I always get blue balls with these stories because it’s rarely ever revealed what the guy–in this case, the guy with the world’s most precisely manicured beard and a date who wouldn’t consider dating me if I donated her a vital organ–said initially to get him ejected.

A fan kept yelling at Draymond Green and he and the ref had finally had enough. #Timberwolves #DubNation pic.twitter.com/mc4X6vtrki

I mean, from the looks of this guy, it sounds like he would just shout about grooming products or that he once hung out with Dan Bilzerian shirtless on the back of an endangered animal.

(I only make fun of his because I’d kill to have that jawline and poreless complexion. Hey dude, I have a girlfriend, but can I touch your face?)

P.S. Can someone with a work ethic make a compilation or a rap intro with all the shit Draymond has talked to fans and players. This was literally like 10 days ago.

Someone snitched on Draymond for taking too long to come into game and he calls that person "a fucking pussy, you're a little bitch" (First half of video is from Warriors broadcast, you can hear Draymond in the second half of video from Blazers broadcast) pic.twitter.com/VMeYPcJT5G