Draymond Green On Kevin Durant Saying He Didn’t Feel Accepted On The Warriors: ‘It Pisses Me Off’ 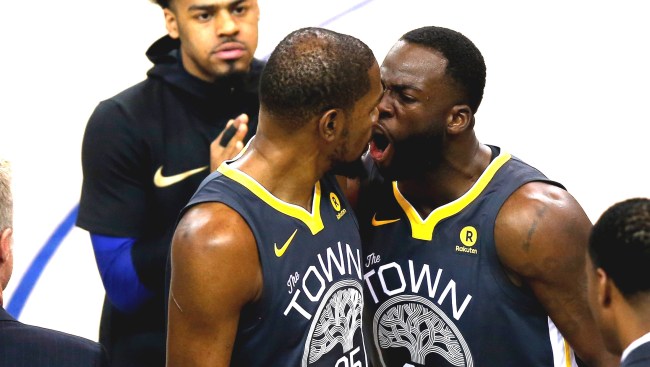 Draymond Green and Kevin Durant had arguably the best NBA beef of the 2018-2019 season. I say arguably because there were SO many beefs it’s actually hard to rank them. Everybody was getting in their feelings last season.

Green and Durant’s beef was pretty special though. How often do two NBA teammates get into fights where one of the player’s mom and the other one’s brother get involved?

The cuts went pretty deep after Green reportedly called Durant a “bitch” several times and telling KD go ahead and leave in free agency because the Warriors had already won before without him during a game versus the Clippers last November.

This, being something of a habit for Green (yelling at Durant), led Warriors general manager Bob Myers to suspend him for a game.

Things didn’t appear to get much better between the two superstars from there as Durant was still pretty salty and Green didn’t seem to mind too much that he ended up leaving the Warriors to join the Nets.

Following his departure, Durant claimed that he felt he never had “full acceptance” in Golden State and that his years with the Warriors – years where he won two NBA championships, two NBA Finals MVP Awards and made over $81 million – “didn’t feel as great as it could have been.”

This week in a joint interview with Warriors GM Myers on The Woj Pod, Green addressed his long-standing beef with his former teammate.

During the interview, both men talked about the suspension Green received after ripping Durant.

“Bob and [head coach Steve Kerr], they told me, like, ‘You need to apologize to Kevin,’ before I got suspended,” said Green. “And I said, ‘No, I’m not apologizing because y’all telling me to apologize. I’m not gonna do that.’ And I didn’t. And I never apologized to him until I came to grips with myself. … Not because of some games or the team ain’t flowing right. But I can kind of see a look in my brother’s face that I have not seen. He’s hurt. How do I fix that? And that was what bothered me more than anything.”

Later, when asked about Durant’s comments about not feeling accepted or part of the group while with Golden State, Green responded, “The thing that bothered me most was not that Kevin was mad or not that people were saying I was wrong or not that we lost that particular game and definitely not that Kevin decided to leave. The thing that bothered me the most was that when, you know, when Kevin goes on his things he’s doing in the media or stuff and he says, oh, I wasn’t a part of that. Or, like, I was different than those guys. A part of it is like, no, he [was] one of us, and it pisses me off.”

Any chance Durant will make it back to the court by then? Highly unlikely, but you know he’s going to try.