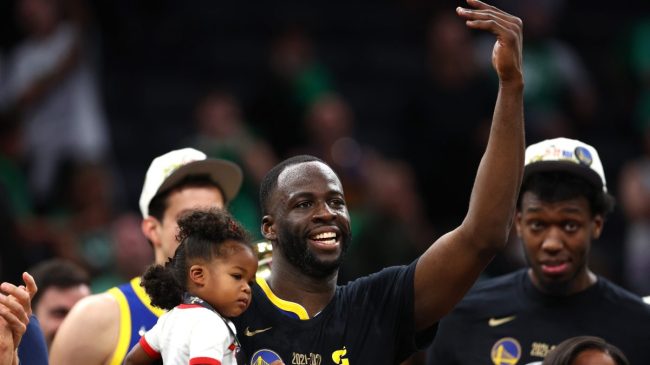 Draymond Green is having himself a time in the Warriors’ NBA championship parade on Monday.

The forward has taken every chance he can to soak in the experience of winning his fourth title with Golden State. He’s also taking shots at those that doubted the Dubs throughout the year.

And there were certainly a few that he’d classify as “haters” during this postseason run. That includes players like Ja Morant and Jaren Jackson from the Grizzlies, Boston fans, and sports media as a whole.

With the heat that Green, in particular, took over the course of the Finals, it’s no surprise he’s been boisterous during this celebration tour. In fact, he might be a little too loud as he can’t stop himself from dropping F-bombs.

We heard that foul language in a message he delivered to the doubters on Monday afternoon.

Draymond Green sends a message to the haters during title parade

Warriors parade off to a hot start. pic.twitter.com/NRKB2o4QCr

“Thank you [Warriors fans] and f-k everybody else.”

The sports world heard that one loud and clear, but it wouldn’t be the last soundbite they’d get from Green.

Draymond to all the haters:

Many around the NBA were talking about Draymond Green’s celebration lap at the parade on Monday. Everyone is here for it.

I am here for this @Money23Green

He is sending over due invoices to EVERYBODY!!!!

Green is definitely living this championship to the fullest. From now through next year, he plans to sit back and “continue to destroy people on Twitter.”

This won’t be the last we hear from Green this summer.