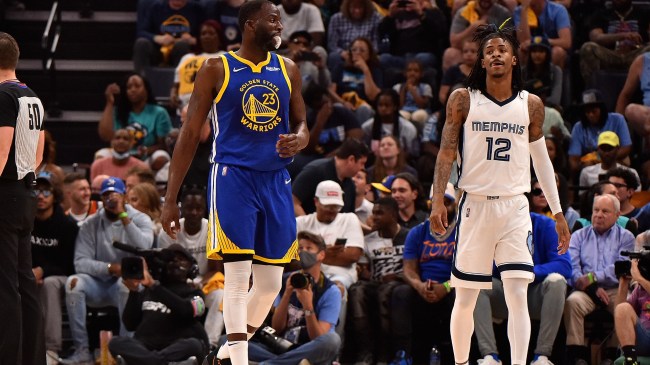 Draymond Green continues to get inside the heads of opponents, even when he’s not on the court.

We just watched the Golden State star irk Jaylen Brown, Grant Williams, and the rest of the Celtics team as the Warriors closed out an NBA championship run. Now, he finds himself in a Twitter feud with a team Golden State beat along the way.

Draymond has singled Ja Morant as his latest target, going after the Memphis guard on social media.

Let’s back up a bit to see exactly how this all began to unfold.

After the Warriors’ title win against Boston, Klay Thompson said he was motivated by a tweet that Grizzlies’ forward Jaren Jackson posted during the regular season. The message said, “Strength in numbers,” which Thompson said rubbed him the wrong way.

Ja Morant then joked that the Grizzlies were living rent free in the heads of the Warriors, even while they made this recent championship run.

We traded that real estate in @JaMorant the property value was higher in Boston https://t.co/X7Du6zSiZF

Draymond snapped back at Ja, saying they weren’t thinking about Memphis one bit during their NBA Finals win. He didn’t stop there, though.

Green then made it clear that as the champs, Golden State should get a little more respect from their foes in the upcoming season. The thought of a Grizzlies-Warriors matchup on Christmas Day was brought up.

Morant said the game should be played in Memphis. Green has other plans.

It seems we’ve got a little rivalry forming with bad blood building on both sides. If the NBA does set this Christmas Day matchup, it’s going to be must-see TV.