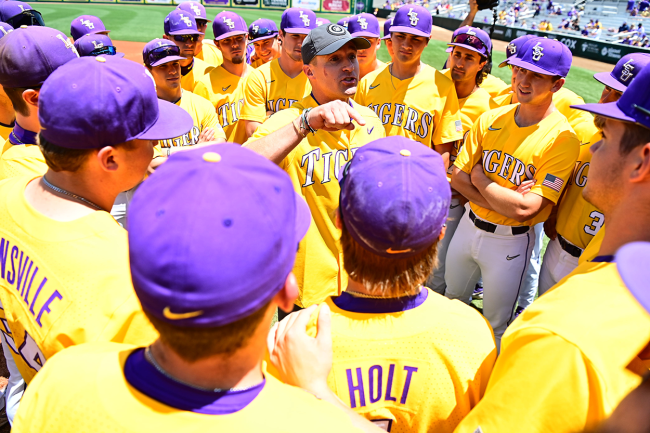 LSU baseball is right on the edge of hosting a postseason regional in Baton Rouge. The Tigers are 29-14 overall with 12 wins and nine losses in the SEC.

As a result, the rubber match was crucial for the home team’s chances of building a resume that is worth a regional host bid. Prior to the game, New Orleans and Louisiana legend Drew Brees stopped by to throw out the first pitch.

It was a bit outside, but the catcher framed it to where he might have gotten the call. Especially at home.

Drew Brees to Drew Bianco on that first pitch.

Brees was in the LSU baseball team huddle before he left the field. #LSU pic.twitter.com/vNZWUyBQKB

After lobbing one in over the plate, Brees took a moment to address the Tigers in the huddle before they took the field. He gave a speech and closed it out with his famous pregame call and response that he used to do before every game on the gridiron.

Set the example.
Set it high.
Play for each other.@drewbrees brought the 🔥 pic.twitter.com/gG7enuIM2B

In addition to getting the team fired up and toeing the rubber, Brees got to meet his doppelgänger. While most look-a-likes might bear some resemblance, that between Brees and sophomore infielder Jacob Berry is astonishing. They are practically identical.

After getting some words of encouragement from the future NFL Hall of Famer, LSU went on to win in epic fashion. Down by two in the bottom of the ninth, a two-run, walk-off dinger gave the Tigers a 2-1 series win.

When Brees is in town, he always brings the magic.