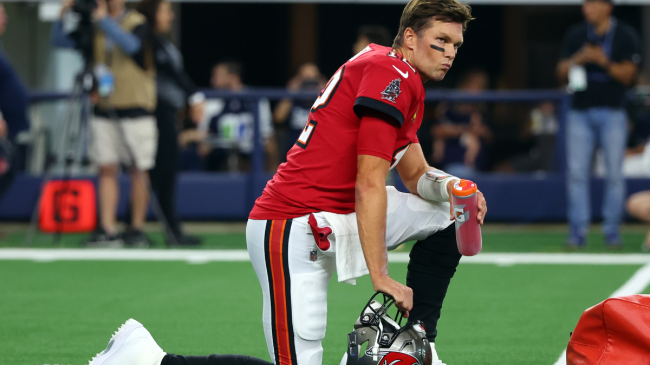 Tom Brady is likely in the midst of his final season in the NFL. The future Hall of Famer retired following the conclusion of the 2021 season, but a short time later, he opted to return to the Bucs.

That decision didn’t necessarily sit well with his wife, supermodel Gisele Bündchen. That’s led to a very public spat between the power couple, one that’s apparently made Tom “very sad” as his most recent professional campaign kicks off.

Brady took an 11-day hiatus prior to the start of this season, but it’s not been enough to mend the relationship. Gisele was visibly absent from Tampa Bay’s last contest versus Green Bay.

With all of that being said, Brady will hang up the cleats after this year, and it appears he’s already got a job in the broadcast booth lined up with FOX.

Drew Brees joined the Dan Patrick Show Thursday morning, and he spoke about his time in the booth. The former Saint spent one season in broadcasting before calling it quits to spend more time with family.

He warned Tom Brady that joining the booth won’t make his schedule any lighter, saying that the commitment is similar to what’s asked in the NFL.

“Last year, I went the media route. That was really enjoyable. I felt like I learned a lot… the reason I didn’t do that this year was simply because it was taking away all my weekends.

“If you’re going to do it right, you’re going to spend the same amount of preparation in preparing to broadcast the game, to do a three-hour production, as you would to play the game.

“It is definitely a commitment, and it takes more time than you think.”

Now, he did note that much of that work can come from the comfort of your own home, will be a nice change from the NFL. Still, don’t expect to have many weekends free once the NFL season starts.

The Tampa QB has signed a $375M contract with FOX. Brees is now on record warning Brady that it might be more than he bargained for. We’ll see how it works out for him.