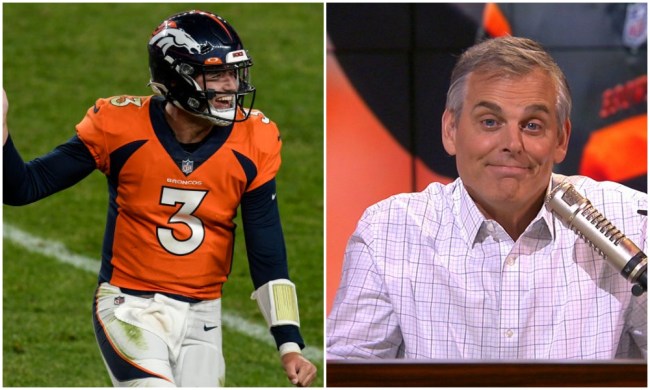 Nothing makes Colin Cowherd happier than when his predictions are correct about a young quarterback in the NFL turning into a bust. It’s Cowherd’s job to give predictions about sports, so instead of focusing on the fact that he inevitably gives dozens of incorrect predictions on ‘The Herd’ every single day, the ones that stick are the ones that he brings up more often than not.

On Sunday, Cowherd fired off a tweet saying “Watching Justin Herbert & Drew Lock on the same field today — can’t give John Elway much confidence going forward.” Fast-forward about an hour later and Lock had helped the Broncos come back against Herbert and the Chargers.

Despite Lock’s efforts in the comeback win, Cowherd piled on the second-year QB during his show on Tuesday putting him in the same camp of ‘busts’ like Baker Mayfield and Jameis Winston while also calling him a Boy Scout.

"I warned you 4 times on this. I've been right every time. I'm going to be 5 for 5… I'm out on Drew Lock."@ColinCowherd explains: pic.twitter.com/qvpkPOVxYR

Lock was asked about Cowherd’s negative comments, specifically about his dance moves, and the former Missouri quarterback gave a great response.

Lock, on the comments from Colin Cowherd about him dancing: “Truthfully, I feel like the person — if not other people … might not be able to dance as well."

When it’s all said and done, Cowherd simply hates seeing quarterbacks dance. Lock, Manziel, Newton, Winston, and Mayfield all love to bust a move after a touchdown or in the locker room. Cowherd would probably rather see a quarterback celebrate by remaining calm and offering up nothing but ass slaps to his offensive linemen.