Duke Basketball Cancelled Its Remaining Non-Conference Games Due To COVID-19 Precautions After Coach K Questioned Whether The Season Should Be Played, But What Does It Change? 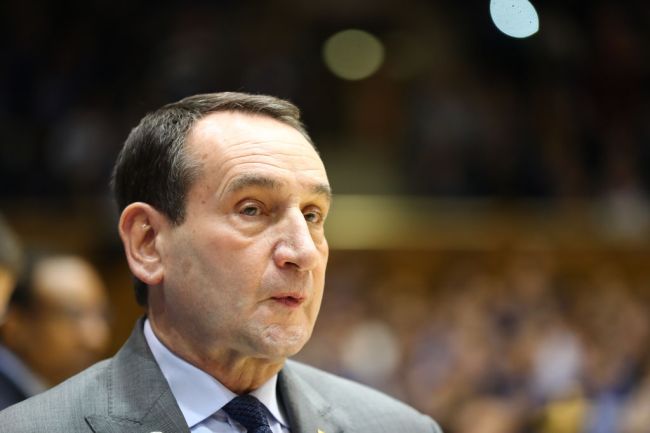 It’s not quite how the headline sounds. Duke basketball announced on Thursday that it will suspend its remaining non-conference schedule and focus on upcoming ACC games, but the Blue Devils only had three out-of-conference games remaining prior to the announcement. The university becomes the first school to make a move like this, but it really doesn’t do much.

UPDATE: We will forgo our remaining non-conference regular-season games for the 2020-21 season. Next up is Notre Dame next Wednesday in South Bend. pic.twitter.com/z3uSVAXjqe

Head coach Mike Krzyzewski was very vocal about his concerns surrounding the 2020-21 college basketball season amidst the COVID-19 pandemic earlier this week, and the program’s decision came two days later. The message appears genuine, but the timing certainly seems curious. His team is 2-2 after two non-conference losses to Michigan State and Illinois, a relative rarity for the team, which led to a postgame press conference where he advocated for a reassessment of the season after a vaccine is readily available. Give or take.

“Basically, it was more of a mentality of, ‘Get as many games in as possible,’” he said. “And I think I would just like, just for the safety, the mental health and physical health of our players and staff, for there… like, to assess where we’re at. You know, in our country today, you have 2000 deaths a day. You know, you have 200,000 cases, a million and a half last week. You have people saying that the next six weeks are going to be the worst. To me, it’s already pretty bad. And on the other side of it there are these vaccines that are coming out, that people say that by the end of the month, 20 million vaccine shots will be given, especially to our health care, to the people who need it. And by the end of January or February, another 100 million. Well, should we not reassess that? You know, just see what would be best?”

Many people began to question the sincerity of his remarks considering the nature of Duke’s record and early-season struggles, and Alabama head coach Nate Oats had some choice words about his Division I coaching counterpart. Thursday’s announcement should put some of those questions to rest— cancelling the remaining non-conference games puts some semblance of money where Coach K’s mouth is.

With that being said, does it really make any difference? Duke was scheduled to host Charleston Southern, Elon, and Gardner-Webb. All three of those games can be chalked up as wins and not one will not be a significant factor when it comes to postseason play or overall record. Especially in a year that will cater to teams that can stay healthy and the blue bloods, like we’ve seen with Ohio State on the gridiron. Duke is a blue blood.

It wasn’t hard to cut ties.

However, when it comes to the COVID-19 concerns Krzyzewski brought to light on Monday, playing only conference opponents isn’t. Yes, two less programs (which realistically don’t have as much money as to spend on testing, sanitation, etc.) will travel to Durham, N.C. this year, but 10 other teams will. Some of the non-conference games were scheduled after ACC play began anyway. It’s a fairly inconsequential decision.

And that doesn’t include the other 10 games where Duke gets on a plane and travels outside of its own athletic facilities, or ‘home bubble,’ if you will. This season is going to be a mess but football has showed it can be played at whatever cost.

Krzyzewski also said that his team would be going home for the holidays. That is a good thing, coming from a good place. The players should go home and be with their families for the holidays if they can do so in a safe manner. But if COVID-19 is the concern, as Coach K preaches with his media session on Tuesday, they should be in the home bubble. It seems contradictory.

The double standard between the NCAA and its constituents is in college sports will never fail to be controlled by the money. Duke has a lot of it. Thus, it makes more sense to settle with the three non-conference schools for below the contracted price and not play them than it does to play games that don’t really matter.